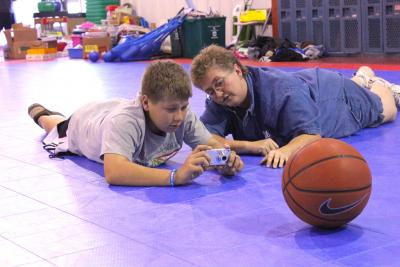 The Osage Nation Foundation made it possible for local youth to unleash their creative side this summer through a photography camp hosted in Pawhuska.

The camp, held July 30-Aug. 3 at the Osage Nation Boys and Girls Club, was the last in a series of free camps offered this summer.

“I was real happy to see that the Osage Nation Foundation offered an art option on top of the sport since not all kids like sports,” said Sherry Stinson, photography camp instructor.

Stinson has been a photographer her whole life and has had her own design business for 18 years. She has also been an instructor for 10 years.

The five-day camp held two sessions each day, a session in the morning for ages 8-12 and a session for ages 13-17.

Participants brought their own cameras and each day they learned about a new function.

Participant Addie Young’s favorite part of the photography camp was learning the different functions and being able to take good photos.

“I really enjoyed taking photos of the basketballs in the gym, and having Sherry helped me out a lot,” said Young, 11. “She is really nice.”

Participants were allowed to print their best photos and designed a frame to put their photos in to take home.

“Seeing the kids get excited about their photos being printed was a real joy,” Stinson said. “Some of those kids were talented and they all really did a fantastic job.”

Tori Polley, 9, was excited when she was able to print her own photos.

“I took photos of the OU mural inside the Boys and Girls Club and I am going to send them to my family,” she said.

She also liked when Stinson critiqued her photos and taught her how to focus the camera lens.

The participants will have one photo featured in the book along with their portrait and a short bio.

“Seeing how the students see, seeing through their eyes, since kids don’t look at things like adults do, is what I really liked,” Stinson said.

[Editor’s Note: Sherry Stinson is the owner of TylerCreative, the company that designs the Osage News.]