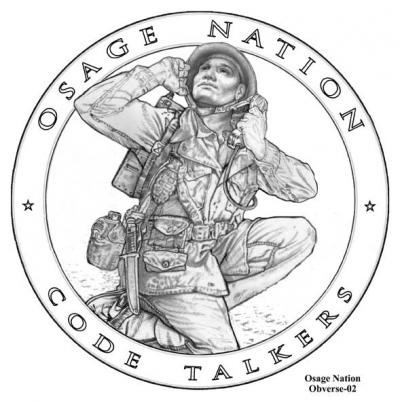 Osage code talker coin could be due to misunderstanding

The commemorative Code Talker Congressional Gold Medal coins being produced by the U.S. Mint in honor of the Osage Nation has left Osages confused.

Prior to the news of the U.S. Mint producing the coins, many Osages didn’t know the plan existed and after learning about it, were skeptical there were Osage code talkers at all.

According to John Henry Mashunkashey, Osage elder, veteran, and one of the people responsible for the design, said to his knowledge there weren’t Osage Code Talkers in WWII.

“The Osages that were in the Army stationed in the European Theatre were not organized or recognized from what I was told,” he said. “They really didn’t do any code talking but they did talk to one another over the radio in Osage when they were in combat.”

The Osage soldiers spoke Osage to one another because they were not fluent in English, he added.

The Osage News asked Michael White of the U.S. Mint Office of Public Affairs how they obtained information about Osage code talkers and he responded with this statement:

White stated in an email he would follow up with the Osage News regarding the verification process as soon as additional information is available.

Mashunkashey and Osage Nation Principal Chief John Red Eagle approved the design of the coin, but Mashunkashey said they did not know it was going to be specifically about Osages. He understood it to be for all Native American Code Talkers.

“[There were] four or five designs for us to pick from,” he said. “We also had the option to draw our own but we picked one of the designs they drew about eight months ago.”

In a letter provided by Mashunkashey, dated July 19, 2012, from Mashunkashey, his wife and Chief Red Eagle to Betty Birdsong, Program Specialist, Design and Engraving for the U.S. Mint, the letter said:

“The committee met and discussed with Chief Red Eagle the design of the commemorative medallion and after much consideration we have elected to stay with the original design that was chosen. However, we are not opposed to sharing the design with any other Native Americans [sic] tribes.

“We consider this commemoration an honor for all Code Talkers who served in the Armed Forces.”

The front and back design of the coin displays the words, “Osage Nation Code Talkers.”

Chief Red Eagle did not respond for this article.

“The [Commission of Fine Arts] approached all tribes and told them they were going to develop a coin in honor of Code Talkers,” Mashunkashey said. “It didn’t say Osages, Navajos, Choctaw or a particular tribe, it just said the design would honor all Native American Code Talkers.”

CFA Secretary Thomas Luebke said it will take the CFA five to six years to review all of the Code Talker Congressional Gold Medal designs.

If anyone has any information on Osages serving as code talkers in WWII please contact the Osage News at (918) 287-5668 or email us atosagenews@osagetribe.org.