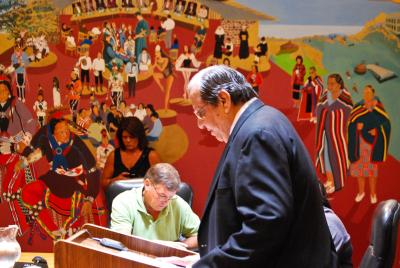 The Third Osage Nation Congress wrapped its three-day second special session with passage of seven pieces of legislation and one bill voted down on Aug. 20. The Congress will next meet for the 24-day Tzi-Zho Session starting Sept. 4.

With a 9-2 vote, the Congress passed a resolution (ONCR 12-18) authorizing approval of a sovereign immunity waiver for the $27.1 million loan being sought to finance the Osage Casino projects planned at Ponca City and Skiatook.

The ON Gaming Enterprise Board sought the loan for the projects and hired a finance attorney to negotiate the loan after the Second ON Congress initially approved the loan during its 12th Special Session last year (ONCA 12-18). The $27,161,000 loan is contingent upon approval of a sovereign immunity waiver, which must be approved by Congress.

According to the resolution, the sovereign immunity waiver is for the $27.1 million loan from a lending financial institution and a $10 million line of credit for working capital and general business purposes.

Gaming board Chairwoman Stacy Laskey said the board hired attorney Fred Assam to negotiate the terms of the agreement with Bank of America. Assam is a partner with Fredericks, Peeples and Morgan where his focus is in Native American finance law.

Assam appeared at the Aug. 20 Congressional Commerce and Economic Development Committee meeting to discuss the loan before its final vote.

Congresswoman Alice Goodfox asked Assam to explain the concept of waiving sovereign immunity for those unfamiliar with its usage, which could make some constituents “incredibly nervous.”

Assam said Osage Casino assets are pledged as collateral if the Nation were to default on the loan and the casino property would not be at risk.

The loan discussion comes more than eight months after ONCA 12-18 was passed by Congress to authorize the loan. At that time, Congress debated whether to allow the gaming board to seek the loan from an outside financial lender or lend the $27.1 million out of the Nation’s reserves, which sits at approximately $50 million.

The committee passed the bill onto the entire Congress for a floor vote where it received “no” votes from Congressmen William “Kugee” Supernaw and Geoffrey Standing Bear and nine “yes” votes. Congressman Archie Mason was absent during the vote.

Congresswoman Shannon Edwards, who sponsored ONCR 12-18, said the loan provides an avenue for the Nation to establish its credit. “There could be times down the road where we want to do something else, we want to have some borrowing power and this is the way to establish that.”

The Congress voted down an appropriation request of $6,941 for the recently revitalized Osage Nation Enterprise (Inc.) board for the remainder of the 2012 fiscal year. The money would have been used as an initial budget for the three-member board planning to enter into energy-related business projects.

The ONE Inc. budget (ONCA 12-81) was voted down with nine “no” votes, with Congressmen John Free and Standing Bear voting “yes.”

Speaker Raymond Red Corn said some members of Congress are concerned that Osage Nation Enterprise Inc. has not been properly established under the Osage Limited Liability Act (ONCA 08-02), which requires a joint action resolution between the Congress and Executive Branch to form an LLC.

Red Corn said the board plans to return during the Tzi-Zho Session with a new budget. At that time, the Congress will also consider the appointed board members for confirmation. Enterprise board members are Randy Standridge, Jill Jones and Charles Hessert.

Other legislation passed by Congress includes:

ONCA 12-77 – a bill authorizing the Nation’s Treasurer to designate a person to handle procurement duties for the Nation, which includes coordinating all bidding and contracting procedures and documents.

ONCA 12-78 – a re-appropriation of a $75,000 matching grant to the Skiatook Community Health Clinic project now underway.

ONCA 12-79 – an appropriation bill of $601,013 in federal funding for the Child Care Development program.

ONCA 12-80 – to provide a $500,000 appropriation to the ON health claims fund for employees using the health insurance program.

ONCA 12-82 – to provide a $59,000 appropriation of federal funds to the newly created Tribal Development and Land Acquisition Department.

ONCA 12-83 – to provide a $40,349 appropriation of federal funds to the Constituent Services department.