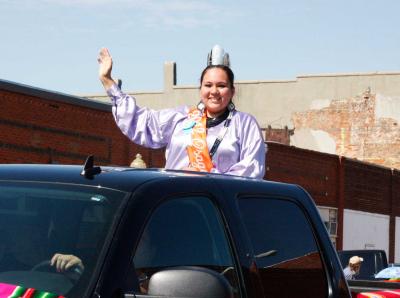 Being the Osage Tribal Princess is ‘a great opportunity’

When Dora Jo Williams put on her crown and sash in her hotel room in Anadarko, Okla., she began to feel a sense of pride as she will be representing 16,150 Osage tribal members for the next year.

“It makes me feel great and awesome to be able to represent my tribe as the Osage Tribal Princess,” Williams said.

“It makes me feel very appreciated and it is an honor to be able to carry this title for another year,” she said.

“She told me how much of a great opportunity it is and how she had met so many different people,” Williams said. “It was something I wanted to do for myself and for my family.”

Williams also admits she was still in “princess mode” since she had held the title of the 2009-2011 American Legion Post 198 Princess.

“I want to be a good role model to the younger generation,” she said. “I want to also show girls my age or younger that they can be an Osage Tribal Princess.”

Williams first stop as the 2012-2013 Osage Tribal Princess was at the 81stAnnual American Indian Exposition of Oklahoma in Anadarko, Okla.

“Last year, my time was cut short at the Expo due to family matters,” she said. “The Osage Tribal Princess Sorority wanted me to try again so I could get the full experience.”

The OTPS is made up of former Osage Tribal Princesses.

Williams, along with 11 other tribal princesses, competed in various events for the title of the 2012-2013 Miss American Indian Exposition.

During the exposition she participated in the fashion show, talent show, parades, dance competition, public speaking and grand entry.

At the talent show she read a story in Osage that she submitted to the Oklahoma Native American Youth Language Fair in Norman a few years ago.

“To be the Osage Tribal Princess you have to know about your tribe, the regalia you wear, the language and also be ready to represent the Osage Nation to the best of your ability,” Williams said.

The Exposition began in 1931 and the first Miss American Indian Exposition contest was in 1939.

“It was the first of its kind,” said Victor Palmer, American Indian Exposition of Oklahoma president. “After the Expo tribes began having their own tribal princesses and it has reached a point now where there is a lot of pride in being a tribal princess.”

When the Exposition first began, it included representatives from the Apache, Caddo, Comanche, Delaware, Kiowa and Wichita tribes, Palmer said.  In 1949, it expanded to 11 tribes including Pawnee, Cheyenne and Arapaho.  The first Osage Tribal Princess was the late Margaret Luttrell Gray in 1941.

Today, the Fort Sill Apache, Ponca, Missouri, Quapaw and Sac and fox tribes have been granted honorary status, and are represented by a tribal representative on the Exposition’s Board of Directors, according to the americanindianexposition.org.

“I like seeing the tribal princesses that come to the Expo because now a days it is hard to find young girls who are not pregnant and meet the standards of being a princess,” said Ruth Wetselline, Apache Tribal Director and acting Exposition treasurer.

Wetselline was the Apache Tribal Princess in 1981 and is happy to see that the Exposition is still going on and tribal princesses attend.

“We thought about canceling the Expo due to funding but we thought about the princesses,” she said. “The Expo is their time to shine and make their families proud.”

Wetselline believes the Expo is a great opportunity for the tribal princesses to meet people, and learn about different tribes. There are seven tribes alone in Caddo County.

Osage Tribal Director Angela Toineeta had a good time at the Exposition with Williams.

“I think it is wonderful she is princess,” Toineeta said. “She is a very responsible and mature young lady.”

Williams’ favorite part of the Exposition was the talent show.

“I got to see the talents from the other Princesses and I especially liked the Ponca Tribal Princess’ talent,” she said.

Williams is going to take a semester off of school to focus on her title. But she plans to attend college in the spring.

“My goal is to try and represent the Osage Nation as much as I can,” she said. “It was tough last year because I was trying to finish school.”

She admits that it is a challenge to maintain being a regular teenager and tribal princess.

“I feel like I am living a double life but I am managing,” she said. “I try really hard to not goof off with my friends in public and dress nice.”

She is the oldest of five children. She has two brothers and two sisters. Her aunt Rosemary Shaw is the only other person in her family to have held the title of Osage Tribal Princess.

Williams said she tries to be a role model to her siblings, especially her sister Autumn Williams, who is thinking of running for Osage Tribal Princess next year.

“It makes me feel proud that she is considering running,” Williams said.

“It doesn’t really matter that I didn’t win the Expo princess title,” she said. “I am just happy to have had the opportunity to go back and meet new people.”