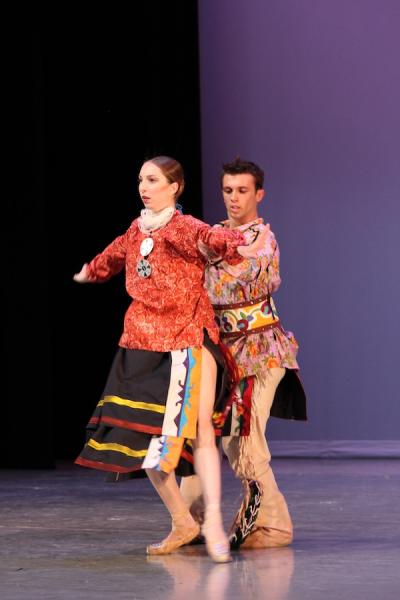 Wahzhazhe ballet performance to be sold on DVD

Plans are underway to release Wahzhazhe: An Osage Ballet on DVD for sale to the public in September. Ballet director Randy Tinker Smith hopes the show will be an inspiration to youth interested in art.

Smith said she plans to show a video of the ballet around Oklahoma to “inspire their artistic endeavors because everything is an art.”

Inspiration is what spurred Smith’s idea to write the ballet and make it become a reality on stage. She recalls listening to a song by coworker Lou Brock (Osage) while she was working at the Osage Tribal Museum in Pawhuska.

The ballet production takes its audience back to the era of pre-contact with Western Civilization and the scenes change the time periods leading to the present. Dance scenes also focus on historical points such as first contact with non-Osages; moving from present-day Kansas into Oklahoma territory; introducing Osage children to boarding schools and the Osage Reign of Terror.

It took two years to create the ballet starting with research to tell the Osage story as accurate as possible, Smith recalls. She estimates that she spent more than 200 hours with Osage elders including the late Harry Red Eagle Jr., Louis Burns and Leonard Maker.

In the end, the ballet production turned into a learning tool for those who worked on the project handling responsibilities including set and costume design, choreography, and promoting the event. The ballet premiered in Tulsa on Aug. 3 with a second performance the following night. Two more performances were held Aug. 10-11 in Bartlesville.

The Osage Tribal Museum plans on selling DVDs of the ballet performance, according to its Web site, adding: “there were so many orders for them at the Bartlesville performance.” The Osage News will report when copies of the performance will be available. Check the museum’s Web site at osagetribe.com or the News at osagenews.org.

The Osage News took several photos of the Aug. 10 performance in Bartlesville and those images are now on the newspaper's Flickr page. Click this link to view more ballet photos:http://www.flickr.com/photos/osagenews/sets/72157631067646964/