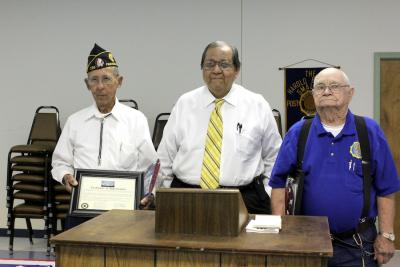 U.S. Navy Seaman First Class David Kimber and U.S. Army Master Sgt. Doyle Smith received certificates of appreciation and folded U.S. flags from the Ladies Auxiliary members during the ceremony. Attending were their family members and fellow veterans who are members of Post 198 and the Ladies Auxiliary.

“Our Osage people always honored our veterans since World War I,” Red Eagle told the crowd. He recalled his father, Ed Red Eagle Sr., was among other Osage veterans who started the American Legion Post 198 in the 1960s with Archie Mason Sr. and Leroy Maker, who all served during WWII. “They were proud veterans,” Red Eagle added.

Kimber’s 1943-1946 South Pacific service includes the Merchant Marines, served aboard Liberty Ships and he participated in countless amphibious landings to deliver troops, food and medicine in wartime. He is also credited with shooting down a Japanese attack aircraft and helped fend off Japanese troops attempting to overrun an island medical facility in the Philippines.

Smith became a career soldier with 27 years of service in the medical corps starting in 1946. He was a trained nurse who served on hospital ships in the South Pacific and Europe. After WWII, Smith also served during the Korean War and retired from service in 1973.

Both men expressed gratitude and appreciation for their honorings. The Ladies Auxiliary and American Legion Post members are honoring area veterans who served during battle, with the WWII veterans getting preference for honors first.

Journalist Tom Brokaw dubbed the World War II generation as “The Greatest Generation,” in his book by the same name. This generation of people include those who grew up during the Great Depression before starting adulthood when the United States entered WWII battles in the Pacific and European counties.

According to the WWII Museum Web site, those survivors who served and fought during WWII are in their 80s and 90s today. The museum and Veterans Administration estimate WWII veterans are dying at the rate of 740 per day.

This is the second time this year the Women’s Auxiliary held a ceremony to honor WWII veterans. In May, Bill A. Mashunkashey Sr. (Army) and Bob Ward (Navy) received the same honors for their service.

To view more photos from the honoring event, visit the Osage News Flickr page online where a photo set has been created at:www.flickr.com/photos/osagenews/sets/72157631113006634/