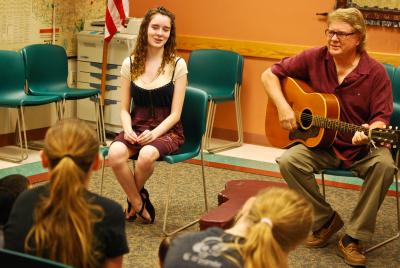 Kendall Chapman-Ryan, 12, and her father Jim Ryan, promote children’s literacy with their program BARK (Books Are Really Keen). The San Antonio, Texas residents came to the Pawhuska Public Library on Aug. 8 where they held a back to school read-along for several elementary school-age children who are beginning readers. Ryan’s wife and Kendall’s mother, Carol Chapman-Ryan, also joined in with the read-along activities.

The Ryans opened the event with a sing-along featuring several children’s classics including “She’ll Be Coming ‘Round the Mountain,” with Jim Ryan on guitar. Afterward, the Ryans took turns reading storybook favorites aloud to their crowd of more than 20 including, “Froggy Learns to Swim.”

“We had a great time working with the kids and sharing some songs and stories,” said Jim Ryan, who is a retired schoolteacher and was born in Pawhuska. This is the second year for the BARK program, which was hosted last year at the Wah Zha Zhi Cultural Center. Carol Chapman-Ryan is also a schoolteacher in San Antonio, Jim Ryan said.

This year, the Ryans brought approximately 50 young reader-appropriate books to Pawhuska then allowed the attendees to pick a few books to take home free of charge.

The spectrum of books provided by the Ryans includes those from the Clifford the Big Red Dog series; Curious George and National Geographic Young Explorer!

Jim Ryan said he and Kendall also left 139 books for distribution to all the first and second graders at Pawhuska Elementary School.

“Kendall and I both get a good feeling from helping the children learn to read and giving them free books,” said Ryan. “We have a great time doing it and it gives me a chance to give something back to my hometown.” Ryan added his family plans to bring BARK back to Pawhuska in December after Christmas Day.