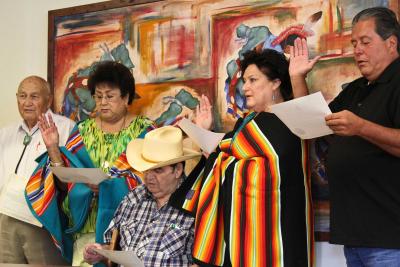 Five Osages will serve staggered terms on the Osage Tax Commission after being appointed by Principal Chief John Red Eagle.

The five commissioners will be subject to Osage Nation Congress confirmation for their terms. ON Trial Court Judge Marvin Stepson administered the oath of office.

All five are subject to Congressional confirmation with other recent board and commission appointees during the 2012 Tzi-Zho Session starting Sept. 4.

The ON Tax Commission is in charge of decisions to levy and collect taxes, and to license and regulate certain activities within the Nation. The Tax Commission office regulates and collects fees on activities including tobacco sales, business licenses, issues tribal vehicle tags and photo identification cards to enrolled Osages.

See more photos from the Tax Commission swearing-in on the Osage News Flickr page. The photo set is at:www.flickr.com/photos/osagenews/sets/72157631167979804/