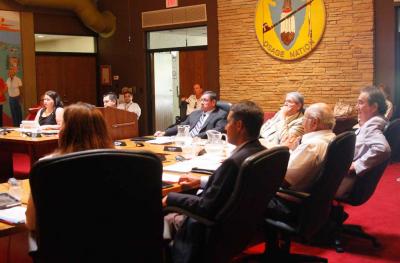 The Third Osage Nation Congress is convening for its inaugural Tzi-Zho Session starting Sept. 4 at 10 a.m. in the Congressional Chambers on the government campus.

The 24-day session will be used to consider various pieces of legislation, the Nation’s 2013 fiscal year budgets and anything else brought to the Legislative Branch’s attention. The session mayextended, if necessary, by three days with the approval of two-thirds of the Congress.

According to the Day One agenda the Congress will be considering various pieces of legislation including the following items:

- Consideration of rules changes regarding the Congressional Appropriations Committee.

- ONCA 12-87, An appropriation bill to provide $225,000 to the Properties Department for architectural design and preparation costs of the proposed Fairfax Family Center (sponsored by Congressman Geoffrey Standing Bear).

- ONCA 12-68, An Act to establish law governing the management, permitting, and use of water within the Osage Nation (Standing Bear).

- ONCA 12-84, An Act to establish a Commission to study the feasibility of creating a Tobacco Manufacturer and Distributor through a wholly owned LLC; and to establish an alternate effective date. (Congressman Daniel Boone)

- ONCR 12-20, A Resolution to adopt the articles of organization for the limited liability company, Osage Nation Energy Services, LLC, to be formed under the Osage Nation Limited Liability Companies Act. (Congressman John Free)

- ONCR 12-19, A Resolution to provide for an election to amend Article VI, Sections 3 and 5, and Article VII, Sections 2 and 4 of the Constitution of the Osage Nation (Congressman John Maker). If passed, this resolution will ask voters to decide whether those elected to Congress and the Office of the Chiefs should be limited to three full consecutive terms each.