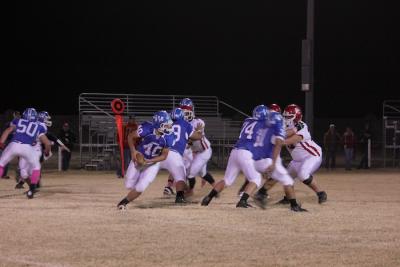 The Woodland Cougars scored their sixth win of the season against the South Coffeyville Lions, 60-12 on Oct. 19.

The Cougars didn’t waste anytime and scored a 65-yard touchdown four minutes into the first quarter, 6-0.

“Don’t get me wrong, they were good but in the end we came out on top,” said Cole Brumley, an Osage player for Woodland.

At the end of the first quarter, the Cougars got a safety, 8-0.

At the beginning of the second quarter, Brumley scored a touchdown and 2-point conversion for the Cougars, 16-0.

With 8:51 to go in the second, the Cougars blocked the Lions’ punt at the 30-yard line. Less than a minute later, Brumley scored a touchdown and Mark Grigg (Osage) scored a 2-point conversion for the Cougars, 24-0.

A minute later, the Cougars scored another touchdown. Kenny McInroy (Osage) made a pass to Grigg for a 2-point conversion, 32-6.

With 5:55 to go in the second, the Cougars tackled the Lions’ quarterback for a first and 10. Ten seconds later, McInroy made a 40-yard pass to Kirk Shaw (Osage) for a touchdown, 38-6.

McInroy then passed the ball to Grigg for a 2-point conversion, 40-6.

The Lions made their second and final touchdown with 6.6 seconds remaining in the second quarter, 48-12.

In the third quarter, Brumley scored a 68-yard defensive touchdown, 54-12.

The Cougars finished the game with their sixth touchdown in the fourth quarter, 60-12.

“Sindelar’s offense is the best you can ask for but no team is perfect,” Brumley said referring to Woodland Head Coach Joe Sindelar. “Overall we played good and are ready to play Welch this Friday.”

In other local high school football news, the Hominy Bucks beat the Summit Christian Academy Eagles, 44-18. The Bucks are now 3-5.

The Pawhuska Huskies beat the Chelsea Dragons, 28-12. The Huskies are now 3-5.

- Woodland vs. Welch (Away)