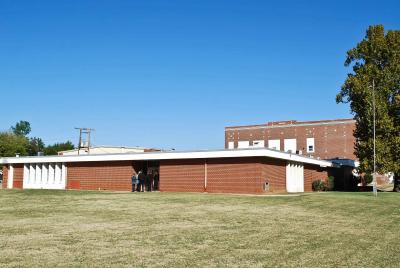 Efforts are underway in Skiatook to bring a community health clinic to the town thanks to a federal grant and a $75,000 matching fund from the Osage Nation.

On Oct. 19, Principal Chief John Red Eagle presented the $75,000 matching fund check to the Focus Health Group overseeing the Skiatook Community Health Clinic project. The group is also a recipient of a $99,600 grant from the U.S. Department of Agriculture to build the clinic in the former junior high school on South Osage Avenue.

Nation officials from both Congress and Executive Branch were on-hand to watch the check delivery to the three-man Focus Health Group at the former school building. “We could not do this without your help,” Focus group member Jack Rankin said after accepting the check. On hand were Red Eagle, former Congressman Eddy Red Eagle who sponsored the original 2011 appropriation bill for the matching fund donation, and Debra Atterberry, senior executive advisor for Red Eagle’s office.

Focus group member J.D. Prather, a Town of Skiatook Trustee, said the clinic plans call for the facility to serve patients afterhours. The clinic will be staffed by health care providers in several fields and will be open until at least 9 p.m. The Town of Skiatook owns the former school building built in the 1960s, according to Prather, who said the north half of the building will be used in a separate project for a larger senior center.

In the meantime, the Focus group is still considering plans before the renovation construction starts. The school classrooms and building infrastructure must be refurbished and updated to accommodate clinic features such as patient examination rooms, a nurse’s station, patient waiting area, doctor offices, etc.

Prather said the clinic design plans must be finalized by the Focus group members first to stay within budget. The Focus group includes Prather, Rankin and Bud Ricketts.

Skiatook sits on the Osage and Tulsa counties’ border with an estimated 500 Osages living in the area, according to the Executive Branch earlier this year. Several Nation officials supported the clinic for its accessibility to Osages living in the region who are not able to make the drive to healthcare facilities in Tulsa, Bartlesville or Pawhuska’s Indian Health Service clinic.

The $75,000 was originally approved in 2011 by the Second ON Congress, but the appropriation bill (ONCA 11-69) stated the matching fund donation cannot be made until the Nation receives a copy of the USDA grant award letter. The $75,000 donation was to come out of the 2011 fiscal year funds, but the Nation and Focus group did not receive the letter until after the fiscal year ended.

At the recommendation of Treasurer Callie Catcher, the Nation reappropriated the unspent $75,000 matching fund donation for FY 2012 because the award letter came late, according to Atterberry. The Third ON Congress approved a second appropriation bill (ONCA 12-78) for the matching fund donation during its second special session in August.