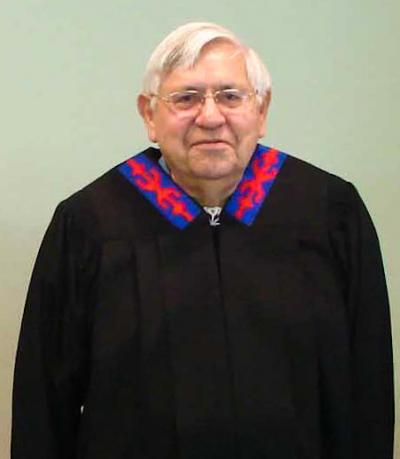 Charles Henry Lohah, Osage, of Hominy, Oklahoma, departed this Earth peacefully on Thanksgiving morning, November 22, 2012, at the age of 78 years following a long illness.  Born in Hominy on September 24, 1934, Charles attended Sunset School then Hominy Elementary and High Schools, where he played the trumpet in the band.  A graduate of Benedictine Heights College in Tulsa with a Bachelor’s Degree in Philosophy, Charles went on to complete law school at the University of Tulsa School Of Law.   Charles’ military service included service with the Oklahoma National Guard, the United States Air Force, the Oklahoma Air National Guard, and the Air Force Reserve.

Immediately following law school, Charles served as a Labor Investigator for the U.S. Labor Department in Montgomery, Alabama.  He returned to Hominy in 1964 where he practiced law and then served as Assistant Osage County Attorney until his appointment as Osage County Judge followed by his election as Associate District Judge for Osage County.  Also during this time period, Charles served as a Board member and legal counsel to the Osage Nation Organization, an association of concerned Osages seeking the re-establishment of a Constitutional form of government for the Osage people, a cause to which he was dedicated throughout his lifetime.  Of his many achievements, he was most proud of being selected to serve as the first Chief Justice of the Osage Nation Supreme Court under the Osage Nation Constitution of 2004.

In 1969, Justice Lohah accepted a position in Washington, D.C. as Executive Director of the American Indian Task Force funded by the United States Office of Economic Opportunity, where among other things he oversaw an assessment of the legal needs of American Indians, which ultimately led to increased legal services to American Indians, including the establishment of the Native American Rights Fund, where he served as founding Board Chairman. He was instrumental in the establishment of the Council of Energy Resource Tribes, a consortium of energy producing tribes organized to protect and advance the interests of its members.  In addition to his work with CERT and NARF, Charles served on a number of Boards and Federal Advisory Committees, including service as Co-Chairman of the Consumer Advisory Committee of the Federal Energy Administration, Advisory Committee on Geothermal Energy for the U.S. Energy Department, and the Advisory Committee on Synthesized Gaseous Hydrocarbon Fuels for the U.S. Federal Power Commission.

In 1974, Justice Lohah accepted a position as Director of the Office of Indian Educational Opportunity at the University of Colorado at Boulder.  He later served as a Professor of Law with the Antioch School of Law in Washington D.C., where he had also served on the Planning Committee. He assisted the Shoshone Bannock Tribes of Idaho establish their tribal judiciary then served as Court Administrator and Chief Judge.  During the 90’s Justice Lohah served as technical advisor to the Osage National Council.  Retiring in 1997, Justice Lohah remained active, serving on various Boards and Committees, including the Board of Americans for Indian Opportunity, founded by LaDonna Harris, Comanche, and dedicated to advancing opportunities for American Indians and American Indian tribal governments.

Justice Lohah, whose Osage name is Grah Moie, is a member of the Eagle Clan, the grandson of O Loh Hah Walla and great grandson of Pah Hunka Gahreh. He was preceded in death by his loving parents, Henry and Madeline Lohah, his beloved sisters Hazel Lohah Harper and Rose Lohah Jake, two infant brothers, Henry Lohah, Jr. and Simon Lohah; and nephew Johnny Jake.