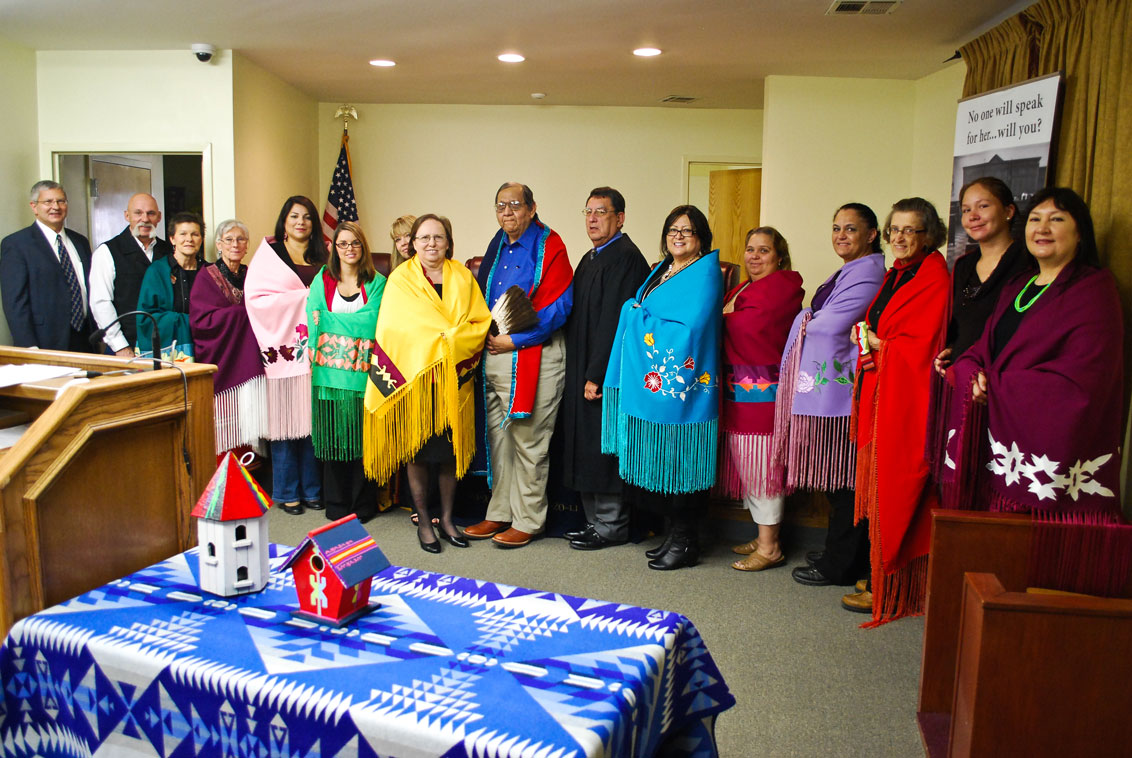 Nikki Lorenzo’s workday depends on the needs of children at the heart of abuse and neglect. Children lost in the system of both state and tribal courts.

As a Court Appointed Special Advocate (CASA) worker, Lorenzo works with families, especially children, and provides reports and recommendations on the cases to a judge. Those reports help the courts determine what is in the best interests of the children involved.

Currently, Lorenzo (Osage) said she is working with a woman seeking custody of her children after a run-in with the law involving drugs and escaping a bad relationship with just the clothes on her back.

“The mom wants her kids back, she’s done everything in drug court, got her GED,” Lorenzo said, adding she helped the woman seek WIC benefits.

This is one of many scenarios a CASA volunteer could take on when he or she is assigned a court case involving at-risk children. And the program is needed in Osage County with more than half of the court cases involving Osage children, CASA officials say.

The availability of CASA in the Osage tribal court system was made possible by legislation passed by the Second ON Congress amending the Tribal Juvenile Code to include CASA volunteers as guardian ad litems who are assigned to juvenile cases by a judge. The law (ONCA 12-21 sponsored by Congressman Geoffrey Standing Bear) was passed unanimously on March 28 during the Hun-Kah Session.

Helen Norris (Pawnee), director of the Pawnee/Osage CASA office, said she’s thankful for the support and welcoming of the CASA program into Osage tribal court. Before, the office was only involved in Osage County District Court cases while it handled cases in courts for both Pawnee County and the Pawnee Nation after tribal officials approved a resolution.

According to Norris, 60 percent of cases heard in Osage County court involve Osages. To prepare for state and tribal cases, CASA volunteers not only complete 30 hours of required training, they also have 10 additional training hours on Osage and Pawnee history and cultural customs, Norris said.

“We’re one of four (CASA offices) in the nation that cross-trains CASA volunteers” for both tribal and state cases, Norris said. If a case begins in state court but moves to tribal court, the CASA volunteer stays on the case and vice versa if a tribal case transfers to state court jurisdiction. The CASA volunteer would keep a constant presence in transferred cases because state social workers handling cases transferred to tribal courts cannot follow the cases once they leave the jurisdiction, Norris said.

ON Trial Court Judge Marvin Stepson describes CASA’s presence in tribal court as a “momentous occasion. This is an important part of what we’re going to do to take care of our kids in court.”

Terry Mason Moore, an Osage attorney, is chairwoman of the Pawnee/Osage CASA Advisory Board and previously served as a Pawnee Nation trial judge. She said the written reports and recommendations made by CASA volunteers made a difference in the cases she heard involving children.

With the addition of Osage Nation court cases, the Pawnee/Osage CASA program is seeking more volunteers to take on cases in both county and tribal court. The CASA program is also holding its annual Birdhouse Auction fundraiser on Dec. 13 at the Immaculate Conception Catholic Church, Parish Hall in Pawhuska. The auction starts at 7 p.m.

The Pawnee/Osage CASA program receives federal funding through the National CASA office, but that money was cut by 63 percent last year, meaning the office must seek donations and fundraise to cover the shortfall and pay for operation costs for the next year, Norris said.

The program got by this year with donations including a $37,000 donation sent from an Osage attorney wishing to remain anonymous shortly after Christmas 2011, Norris said. Other smaller donations followed and CASA is also a recipient of a $10,000 donation after the Second ON Congress voted for the donation appropriation (ONCA 12-28 sponsored by Standing Bear) to the Judicial Branch in April 2012.

The fundraiser auction will feature birdhouses decorated by local area artists and those items will be up for grabs Dec. 13. Osage artists who decorated birdhouses for the CASA auction in the past and will be asked to again this year include: Joe Don Brave, Gina Gray, Wendy Ponca, Alex Stock, Jozi Tall Chief, Ted Moore, John Free, Ryan Red Corn and Rhonda Kohnle.