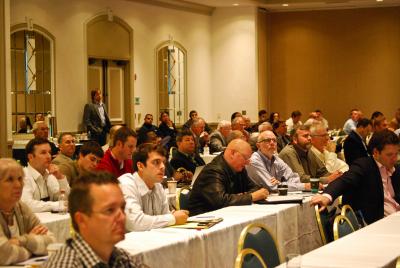 TULSA, Okla. – This year’s Osage Oil and Gas Summit’s annual lease auction raised $14,200 with three land tracts selling close to the minimum bid amounts for oil and gas production. The total is one of the lowest amounts raised during the auctions geared at leasing land tracts and offering a bonus to the quarterly shareholder payments.

Oil and gas energy professionals, government officials, and Osage and non-Osage industry followers gathered for the 11th annual Oil and Gas Summit at Tulsa’s Hyatt Regency hotel held Nov. 7-8. This is the third year the lease auction was held during the summit.

Pawhuska-based Easley Auction Service presided over the Nov. 7 lease auction for its second consecutive year with 23 nominated land tracts totaling 3,680 acres (designated for oil and gas combination use) up for grabs. Energy producers, the Bureau of Indian Affairs or the Osage Minerals Council, may nominate the land tracts for the auctions. Each land tract covers 160 acres and requires a 24-month lease with this year’s minimum price set at $4,700.

The auction ended after nearly 30 minutes with three land tracts sold to two companies with one buying two tracts at $4,700 each and the other bid $4,800 on the third tract sold.

Seven OMC members met after the auction, with one absence from Joseph “Sonny” Abbott, and voted unanimously to accept the $14,200 raised in the auction.

Pawhuska BIA Superintendent Melissa Currey said she didn’t immediately know if this year’s amount was the lowest ever garnered at a lease auction, but said: “It’s one of the lowest we’ve seen in years.”

Osages Ray McClain and Lou Phillips attended the summit and said this year’s raised amount was also the lowest they could recall.

OMC Chairman Galen Crum said despite the low amount, he believes one reason for the lower auction bonus raise is because the major companies who currently have valid leases are busy fulfilling those lease requirements.

“Everyone that has the funds are already busy drilling,” Crum said of those who bought 2011 and 2010 leases. “It looks like a bad thing but the good thing is they’re committed for two years.”

Crum also noted a recent lease deal made with Devon Energy on eight tracts of land raising $200,000. Devon bought the eight land tracts for the same 24-month duration as the tracts sold in the auction, Crum said. The company must also abide by the same lease rules like other companies or lose the land.

The eight tracts became available after former leaseholders Sand Ridge Exploration failed to drill by the deadlines specified in their lease agreements, Crum said. The Devon deal was announced at the Oct. 17 OMC meeting. Crum said the two sides negotiated a cost of $25,000 per land tract totaling $200,000.