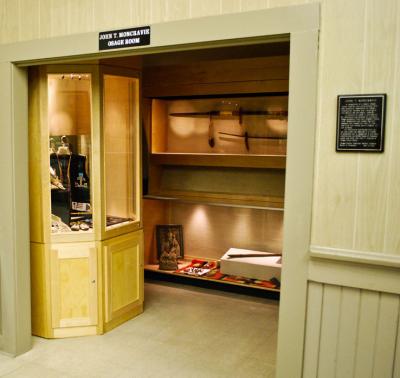 Several Osage artifacts and cultural items are on display in an exhibit named for John T. Moncravie, after he donated items and display cases to the Osage County Historical Society Museum in Pawhuska.

Moncravie, who donated two display cases and one custom-made display case for several of the museum’s Osage collection items, included a feast bag, Chief Bacon Rind’s bow and a war lance. Those items are stored in state-of-the-art display cases, designed to protect the artifacts from being disturbed and are also equipped with lighting that prevents wear and fading of the materials.

An Air Force veteran with linguistic and research experience, Moncravie offered to donate the cases after visiting with museum officials earlier this year.

“I’ve done well,” Moncravie said. “It’s about giving back, this is what I thought was necessary for me to give back.”

On Nov. 3 the Osage County Historical Society Museum honored Moncravie by dedicating the “John T. Moncravie Osage Room” to him. On display in the room are items including: an owl feather fan; a war axe found in a Missouri creek bed; a flute with mink fur; an Osage cradleboard and a woman’s wedding hat.

Photos from the 20th century are also on display in the Osage Room. Museum worker Rhonda Kohnle pointed to a black and white photo featuring a wedding where female relatives are carrying the bride to her husband. Kohnle said the photo comes from the early 1900s.

Kohnle said the display cases’ fiber optic lighting is top of the line and will keep the collection items from fading. She said the largest display case was custom-built for the war lance.

Kohnle said most of the museum’s Osage items were collected or donated to the museum but Moncravie also donated an Osage ceremonial drum and bronze statue. Other items featured in the cases are mens and women’s Osage clothing, including a vest worn by an Osage priest.

John Moncravie (center) visits with Terry Mason Moore (left) and Marvin Stepson on Nov. 3 at the Osage County Historical Society Museum after an exhibit room was dedicated to him. Moncravie, a researcher, donated display cases to the museum and they now hold collection items in the room named after him. Photo by Benny Polacca/Osage News

Moncravie, of Fayetteville, Ark., is also involved with research work at the Sequoyah National Research Center in Little Rock. He’s worked on an archive project with the Sequoyah center to provide textile collection items for the database including fingerweaving and ribbonwork.

Next on the horizon for Moncravie is creating lectures on the Osage, which would be presented at the Pawhuska Public Library and recorded on DVD. Moncravie also plans to create a database of Osage artists and their works.

The Osage County Historical Society Museum is located at 700 Lynn Ave. in Pawhuska and can be reached at (918) 287-9119. Its Web site is at: www.osagecohistoricalmuseum.com