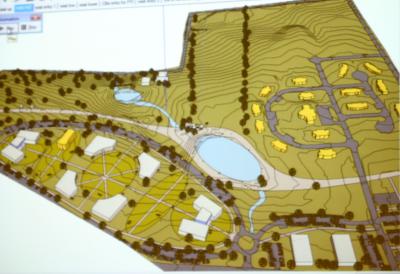 The Third Osage Nation Congress is slated to meet for its third special session starting Dec. 3 at 10 a.m. in the Congressional Chambers. The legislative body will consider several items during the special session including a resolution to authorize the Principal Chief to borrow up to $10 million to complete phase one of the master campus plan.

On Nov. 6, the resolution (ONCR 13-01 sponsored by Congressman RJ Walker and cosponsored by Alice Buffalohead) was filed for the special session, which may last no more than 10 days.

According to the resolution, the estimated construction cost for phase one of the master plan is $22,774,146. It also states: “The Executive Branch has determined that borrowing funds in the amount of $10 million is necessary to implement Phase One of the Master Campus Plan and that debt service would be paid by earnings on investments and savings on building maintenance.” The 92-acre master plan would be built out in three phases according to Nation officials.

Bruce Cass, director of the Nation’s Tribal Development and Land Acquisition Department, said the Executive Branch developed the master plan with Seattle-based architects to address the costs of maintaining aging buildings on the current campus and the lack of space to accommodate the Nation’s growing workforce.

During a Nov. 14 ON employee meeting, Cass said plans in phase one call for building a Welcome Center surrounded by several departments. He also said historical buildings such as the Tribal Museum, the Principal Chief’s office, the Superintendent’s house and the maintenance shop would remain standing while the others would be razed for newer buildings.

Cass said the new master plan costs would cut costs the Nation pays for purchasing and renting outside office space for governmental departments. According to ONCR 13-01, the Nation spends approximately $3 million per year on maintenance and purchasing older buildings to meet space needs.

If Congress passes ONCR 13-01, the Principal Chief must bring any required limited waiver of sovereign immunity back to the Congress for approval prior to executing loan documents, the resolution states.

Architectural firm CollinsWoerman created the master plan filed with the Nation since 2010. A planning committee selected the firm in 2009 during the Principal Chief Jim Gray administration.

According to the plan, phase one includes a Welcome Center surrounded by other departments easily accessible in close proximity by Osages and visitors. The Nation’s police department and Treasury office would also get new buildings. Other entities including the Bureau of Indian Affairs, roads and government branches will also receive new buildings.

Plans call for keeping the existing pond on campus, adding a pedestrian bridge across the water and building a shelter nearby. The master plan buildings may also incorporate “green energy” into its architecture, saving the Nation money in the future.

CollinsWoerman has experience in building structures with sustainable energy features and several of those could be incorporated into the buildings. One example is fitting the buildings with geo-exchange and solar hot water systems. If used, the company says 90 percent of energy used for heating and cooling would come from renewable energy. Another possibility includes building an “utilidor” – an underground tunnel connecting the campus buildings to house utility controls and to provide emergency shelter in case of tornadoes.

According to its Web site, CollinsWoerman is a firm comprising 75 staffers who include architects, planners, sustainability experts and interior designers. These staff members specialize in designing commercial buildings; mixed-use buildings; commercial and retail developments; corporate building interiors and healthcare and technology facilities.

Special Congressional sessions may last up to 10 days, but may adjourn early with a Congressional vote or can be extended three extra days with two-thirds approval from the Congress members.