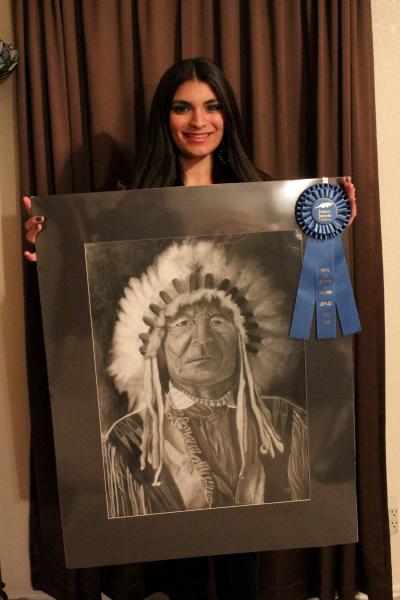 Ashley Ghazal is an Osage artist on the rise

When Ashley Ghazal picks up a paintbrush or a piece of charcoal every worry she has vanishes and a smile appears on her face.

“I could have any problem in the world but as long as I am doing an art piece I can forget about my problem,” she said. “I feel the happiest when I am painting.”

Ashley (Osage/Cherokee/Quapaw/Arabic), a junior at Skiatook High School, decided to take an art class her freshman year and discovered her love for painting.

“I always drew when I was little but I didn’t think I was any good,” she said. “But my teacher thought I was really good and told me to enter my art work into a contest.”

Ashley submitted a painting of a Snow Leopard to the 2012 Sutton Natureworks and Essay Contest. She won honorable mention and $500.

She was very surprised when she heard the news and it was just the encouragement she needed.

“I’m the type of person – I am very critical of myself and I want to be my best into everything I do – I want to see how good I can be,” she said.

In May, she won first place at Tulsa’s Mayfest in the Lower High School 2D category. Her art piece was a self-portrait of her playing the guitar, which she did in charcoal.

In September, she submitted a charcoal piece of a Cherokee Chief that she did in five days, to the 2012 Oklahoma Indian Summer Youth Art Scholarship Competition.

“My art teacher told me about the contest five days before the deadline and decided to do a charcoal piece since I can do more detail with charcoal,” she said. “I started the piece that day and didn’t sleep for five days.”

“When I heard I won I jumped up and down screaming,” she said. “ It’s my favorite art piece and the one I am most proud of.”

Ashley likes to challenge herself when it comes to painting. She likes to get to art galleries in Tulsa where she can learn from other artists’ techniques and styles.

She said she has to visually connect to the object or picture in order for her to paint it.

“I put my whole heart into everything I do and painting takes so much of my time, I like doing things that are more difficult,” she said.

On top of painting, Ashley also sings, plays the guitar and plays the piano.

She began singing in church when she was three years old and has been singing ever since. She picked up a guitar after her father passed away four years ago.

“I began using music and painting as an outlet to help me deal with my dad’s passing,” she said.

The straight-A student sings a little bit of everything and has really shined in jazz choir. She has made it to all state in choir ever since the seventh grade and will be going again this year.

“She is very blessed with a lot of talent,” said Jacqueline Ghazal, Ashley’s mother. “Since we lost her dad she has had such a great calling on her life – she is just going to go far.”

In addition, Ashley has been taking piano lessons for over a year.

“I have a hard time juggling between my music and art because I love them both so much,” she said.

Her favorite painters are Vincent van Gogh and Claude Monet.

Her parents are Jackie (Osage/Cherokee/Quapaw) and the late Mason Ghazal (Arabic). She has two older siblings, Royal Ghazal and Paige Lewis. Royal is a professor at the University of Chicago and an archeologist. Paige is majoring in mathematics at Northeastern State University (NSU).

“I was absolutely blown away when I first saw Ashley’s art work,” Bruno said. “She is an outstanding young lady that is talented in a lot of different areas.”

This is Bruno’s first year working with Ashley but she can already tell she is going to be successful.

Bruno works for the Osage Nation Education Department’s Public Schools Support Program, aimed at students Kindergarten through 12th grade. The program assigns a field facilitator to all Osage students attending schools in the Osage County area and in conjunction with the schools, the facilitator tracks the student’s academic performance.

The field facilitators aren’t restricted to just academic help, they are there to help students with whatever they need to succeed in their academic environment, said Rebekah HorseChief, Acting Field Facilitator and Office and Web Manager for the education department.

In Ashley’s case, it’s fostering her love for the arts.

“She has high expectations for herself and wants to go to college,” Bruno said. “I think it is great when we see young people like Ashley who want to better themselves.”

Ashley said she would like to go to an art school that will improve her talents and showcase her ability. She also would like to major in music, art or possibly both.

“People tell me that I am very self-motivated,” Ashley said. “I just do it and I make myself happy doing it which is good enough for me.”

Ashley is currently working on a self-portrait of her sitting at the piano, which she plans to enter into the 2013 Scholastic Art and Writing Contest in December.

Her mother describes her as being the perfect kid and is beyond proud of her.

“I am very honored to be here to see her accomplish what she has and I know her dad would be proud of her too,” Ghazal said.