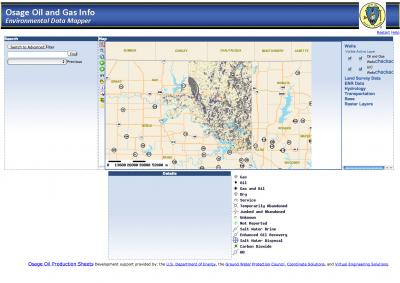 Researching oil production in the Osage just got a lot easier.

A interactive website, built by the Nation’s Environmental Resource department has compiled and mapped out nearly every oil well in the Osage. Information that used to take weeks, sometimes months, to obtain at the Bureau of Indian Affairs can now be obtained at the click of a mouse.

“It’s the result of a very long process and a lot of hard work,” said Darin West, ENR Project Specialist II. “The site shows where all the wells are since the late 1800s, since the beginning.”

The website, http://oag.osagetribe.org/osageonline/, allows oil producers to view any plot in the Osage and note the well’s production history, as well as the companies that have leased the plot, when the well was drilled and who is currently working on it, and what type of well it was or is. The mapping system on the site allows users to see maps of well locations, roads, ownership boundaries, rivers and streams with historical data.

To date, about 60,000 well records are accessible on the site, of which 35,000 are production well records dating back to “inception of exploration on the reservation,” according to West.

“A variety of users will benefit … including the ENR department, the Osage Minerals Council, the BIA and oil and gas operators working on the Osage reservation,” West said.

The work for the website began when the Nation contracted with Coordinate Solutions to create a database that could show the natural resources of the reservation and make it into a Risk Based Data Management System. A former database system was being maintained by the University of Oklahoma but after that agreement ended nearly five years ago, the ENR took up the task that included maintaining the database and digitizing records from the BIA for the database and the website.

The risk based data management system is used by several states when managing oil and gas well data, West said. The system is also used by the Nation’s Underground Injection Control Program and is a much more user-friendly system.

The website is on the Nation’s server and can also be found by going to osagetribe.com and clicking on the Environmental and Natural Resources department’s link and clicking on Online Database Mapping. The site is free and maintained by the ENR department.

West said he is always available to help with the site and can be reached via email at dwest@osagetribe.org or (918) 287-5412.