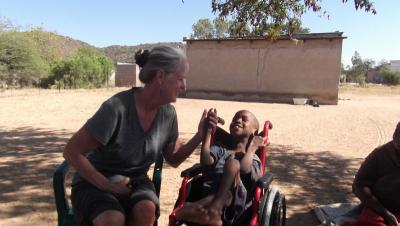 In a rural community in Botswana, an Osage is helping with the epidemic of AIDS and HIV as well as teaching villagers how to grow gardens in their back yards.

Susan Birkhead is a U.S. Peace Corps volunteer who was sent to Kalamare, Botswana in April 2011 for two years as a Community Capacity Builder in a small clinic. She mainly works on HIV and AIDS prevention, education within the clinic, village communities and non-governmental organizations in Kalamare.

Birkhead is trying everything she possibly can to help the 2,339 villagers in Kalamare.

“I have quite a bit of experience in food handling, gardening and nutrition and I think this is one reason I was chosen for this assignment,” Birkhead said. “Botswana has a food security problem plus it is very important for people with HIV and AIDS to have proper nutrition because the immune system is severely challenged because people lack resources.”

“I have created a garden of my own plus a composting system,” she said. “I show villagers my gardening techniques, which include Permaculture Gardening and I share seeds and seedlings with those interested in gardening.”

Birkhead has always wanted to join the Peace Corps ever since 1961 when President John F. Kennedy established it with help from his brother-in-law, R. Sargent Shriver. She said she knew she wanted to have the experience some day.

“I intended to do this when I was young but life got in the way,” she said. “But when the job market lulled and the recession hit in the U.S. I decided it was a good time to apply for the Peace Corps.”

Birkhead admits that Africa wasn’t her first choice on places to go but it was somewhere she had wanted to visit for many years.

“My first choice was Asia where I had been on a wonderful trip to rural province in China accompanying my husband who was the Mayor of Tulsa at the time,” she said. “However, I wanted to serve in the Peace Corps so I accepted the invitation and came to Africa.”

She has now been in Africa for a year and eight months. Her first two months were spent in training before she went to Kalamare, where she has been for a year and six months.

Birkhead has had to make some adjustments living in Kalamare especially since English isn’t the first language spoken. The small village has no banks, grocery stores and shops. She has to travel to the next town by bus or combi (a van which travels within and between small villages) to do her shopping. She then has to carry her groceries and other items back to Kalamare in a backpack.

She is fortunate to live in a house with plumbing and an indoor toilet. However, the water frequently goes off and on. Recently, Birkhead said she didn’t have water for three weeks. Also, when it storms the electricity can go off for several hours.

Despite all the challenges she has to face, Birkhead keeps a positive outlook on things.

“I do like living in another country and learning about the culture and making friends here,” she said.

Also, she has been able to travel to several other African countries including South Africa, Zimbabwe, Mozambique, Okavango Delta and Namibia.

“I celebrated my 65th birthday (Oct. 6) in Kasane, Botswana in the Chobe National Game Reserve watching elephants and giraffe’s drink from a favorite watering hole,” she said.

She grew up in Shawnee and had three older siblings. She has spent most of her professional career in the non-profit world working for Skyline Urban Ministries in Oklahoma City, Neighbor for Neighbor in Tulsa, Community Action Program under Homer Johnson and assisted in the start-up of the Tulsa Community Food Bank.

Her non-profit background has come in handy for various projects she has worked on during her time in Botswana. She has helped with a pen pal project between a primary school in America and the Kalamare Primary School. She is helping the Kalamare Development Committee apply for funds to build a water borehole for an Orchard Nursery Project and The Village Development to build a Community Hall.

She has established a craft group for women to learn, teach and create traditional crafts as well as new crafts. She is teaching the Alcohol and Substance Abuse Counselor to utilize the computer to streamline her reports, make flyers, handouts and a brochure.

She is also helping to improve the library and teaching people how to use a computer. She has established an art exchange project with Kalamare Primary School and schools all over the world.

Lastly, it was brought to Birkhead’s attention that there were several disabled children in Kalamare and other nearby villages. She has been able to get donations of wheelchairs and walkers for those in need.

“The disabled are mostly ignored and discarded,” Birkhead said. “So myself and other Peace Corps volunteers are attempting to collect information regarding all the disabled and providing a comprehensive data base to the government of Botswana in hopes of increased recognition and services.”

Birkhead’s cousin Linda Knox (Osage) applauds Birkhead for everything she is doing in Africa. Also, Knox is not surprise that Birkhead wears so many hats.

“She rises to the challenges handed to her,” Knox said. “I admire her for being so courageous to go off to a remote area of Africa to be a volunteer.”

Knox talks to Birkhead periodically either by email or phone. Knox said she keeps Birkhead up to date on what is going on in America while Birkhead tells Knox all the interesting things she is learning.

“I like hearing all her stories and things she has seen that you normally wouldn’t in America,” Knox said.

Furthermore, in Botswana there are many sections of people that call themselves tribes. Birkhead started thinking about her own Osage heritage and shared with a few villagers that she is a member of a Native American tribe.

“I think it made them accept me more although I look very white,” she said. “Then I began to wonder if an Osage had ever served in the Peace Corps and thought I should do a little research.”

A couple of Birkhead’s relatives asked around and no one could name an Osage who served as a Peace Corps volunteer.

And the Osage Tribal Museum released this statement to the Osage News:

Birkhead hopes that she can influence and inspire other Osages to join the Peace Corps.

“I am very proud to be an Osage Indian and proud to be one of the few American Indian Peace Corps volunteers,” she said.