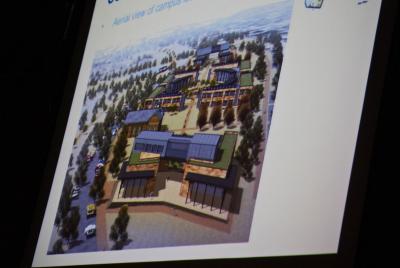 The Osage Nation is one step closer to financing the first phase of construction for the long-awaited master plan for a new Osage campus. Once building starts, construction is expected to take two years on the first of three building phases.

During its third special session, the Third Osage Nation Congress passed a resolution (ONCR 13-01, Walker) authorizing the Executive Branch to seek a $10 million loan to complete phase one of the proposed master campus plan. According to the resolution, the $10 million loan would fund just under half of phase one construction estimated to cost $22.7 million. The Nation would pick up the remaining construction tab.

ONCR 13-01, sponsored by Congressman RJ Walker, passed following debate touching on whether the Nation should pay entirely for the construction versus seeking the loan. The Executive Branch requested the loan resolution at the suggestion of ON Treasurer Callie Catcher.

On Dec. 5, the Congress voted 6-6 on the resolution with Assistant Principal Chief Scott BigHorse breaking the tie with his “yes” vote.

Principal Chief John Red Eagle signed ONCR 13-01 into law on Dec. 6. The resolution allows the Executive Branch to seek loan proposals, but the resolution requires that “the Principal Chief shall bring any required limited waiver of sovereign immunity back to the Congress for approval prior to execution of loan documents.”

Walker discussed the resolution during a Congressional committee meeting before it was voted on.

“We’ve reached a position now where it’s time for the Congress to consider appropriating money for some actual construction,” said Walker, a former Roads Department director who previously sat on the master plan committee. “It’s going to create a campus place for us to be able to recruit some of the young people that we’ve sent out, paid for a portion of their education, and really I think it’s going to serve as a regional example of innovation and something that other tribes and even non-tribal entities will look at as an example for providing a place for their employees to work.”

Phase one comprises a welcome center and buildings for several governmental departments. Historical buildings including the Superintendent’s house, Tribal Museum and Principal Chief’s office will remain standing with the proposed master plan buildings. Seattle-based architectural firm CollinsWoerman created the master plan and has been working with the Nation since 2009. A planning committee selected the firm in 2009 during the Principal Chief Jim Gray administration.

Catcher, a former Cherokee Nation Treasurer, met with the Congressional Committee on Governmental Operations on Dec. 4 and said the Nation has an opportunity to build its credit by seeking the loan. “I recommended the $10 million (loan) because it’s a good way to get your foot into the credit market and still accomplish what we’re trying to do here which is complete phase one.”

During her five-year Treasurer tenure with the Cherokee Nation, Catcher helped the tribe obtain financing for building three health clinics, according to her resume. Catcher and the appointed team responsible for those projects issued $30 million in tax-exempt bonds to fund constructing two clinics and expansion of another. In 2010 the Cherokee Nation obtained $24 million in financing to build a third clinic through a bank-qualified tax-exempt loan.

Catcher said the resolution authorizes the Executive Branch to obtain quotes and information on the loan options and noted the Congress will need to approve any sovereign immunity waiver on the loan from a financial lending institution. She also recommended the Congress commit an appropriation or additional lending for the remaining cost of phase one’s construction (estimated at $22,774,146) before approving the loan.

Bruce Cass, director of the Nation’s Tribal Development and Land Acquisition Department, said construction on phase one will take two years to complete once construction starts.

The Nation’s treasury balance is approximately $50 million and some Congress members believe the Nation should pay for the phase one construction out of pocket versus borrowing the money.

Congresswoman Shannon Edwards said she preferred the Nation pay for the construction and questioned how the Nation would repay the loan. Catcher responded: “Part of the debt service, in my opinion, could come from earnings on the treasury reserve plus we’re currently spending about $3 million a year on maintenance and buying older buildings to meet our space needs. We’ve got people in buildings all over Pawhuska and those people could be paying into space costs, space pool which is a method of allocating the costs of maintenance to all the programs.”

It’s unknown if the space costs and treasury interest would entirely cover the remainder of the construction costs, but Catcher said, “it’s been my experience that it contributes quite a bit.” Catcher also added Congress would need to issue a yearly appropriation for debt service for the loan.

Congressional Speaker Raymond Red Corn asked if the Executive Branch determined which government departments and branches would be included in phase one and if the decision is based on how much those entities spend yearly on space costs.

Cass said the focus would be on “service-oriented” departments for phase one.

Walker said he was in favor of committing to the loan on Catcher’s recommendation touting her experience, which includes serving as acting CEO for CN Businesses Inc. and working in finance posts for private companies.

Before the Dec. 5 vote, Congressman Geoffrey Standing Bear noted construction costs of the project could rise and said he also prefers the Nation pay with its own money instead of borrowing it. Standing Bear also said the Congress should meet with the Executive Branch to discuss other projects on the horizon, which will require funding.

Congresswoman Alice Buffalohead also questioned whether the construction costs would go up and said the Nation could spend the $10 million on other projects including new senior centers and even a hospice care facility. “It’s not that I don’t want to see our campus be beautiful … But right now, I’m looking at my job as helping to prioritize, and making our campus nicer and having nice offices and nice walkways and a pond and a willow tree out there for us to look at, is kind of at the bottom of my priority list so I’ll be voting no,” she said.

According to the master plan, ON departments easily accessible in close proximity by Osages and visitors will be built in phase one with the welcome center. The Nation’s police department and Treasury office would also get new buildings. Other entities including the Bureau of Indian Affairs, roads and government branches will also receive new buildings.