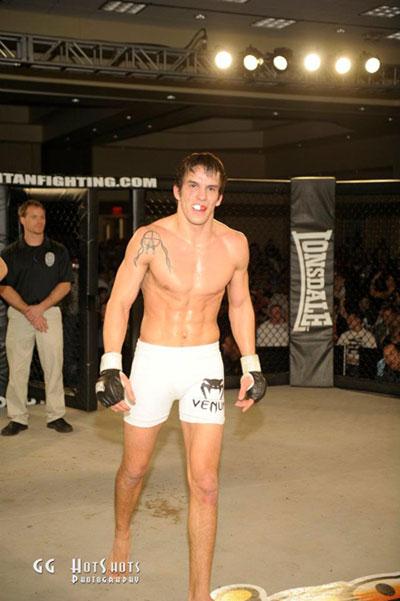 Undefeated Mix Martial Arts wrestler Chance Rencountre is taking his MMA career to the next level.

“I have plans for representing my tribe,” he said. “I want to put a Wah-Zha-Zhi name out there.”

When the Osage Newslast wrote a story on Rencountre in February, he was barely getting his feet wet in the MMA world.

In December 2011, he had spent time in California training with some of the best Ultimate Fighting Championship (UFC) Fighters.

This past summer, he raised enough money with help from his aunt and the Osage Nation Executive Branch to return to California for five weeks in hopes of going pro.

“I thought I would go out there and the fights would come easy,” he said. “But it was harder than I thought and I had a really hard time finding a pro fight.”

Rencountre, 25 and from Pawhuska, felt that the major reason he could not get a fight in California was because people didn’t know him.

He stayed in California for as long as he could financially before he had to return to the Midwest.

“I ended up coming back home and talked with Chad Parks,” Rencountre said. “He hooked me up and I was able to get amateur fights in Kansas.”

Parks owns his own mixed martial arts gym where he trains other athletes who have strong wrestling backgrounds, like Rencountre.

Rencountre graduated from Pawhuska High School in 2005 where he wrestled under Chad Parks’ father, Martin Parks. He attended Labette Community College from 2005 to 2008. In 2008 he was named the Academic National Champion and the Wrestling All-American 2008, the only Native American to do so.

He took a year off and returned to school on a wrestling scholarship at Fort Hays State University in the fall of 2010. He was ranked eighth in the nation and was ranked first in the Mid American Intercollegiate Athletic Association.

After some legal troubles resulted from defending a friend he left school to wrestle professionally. He is a couple credits shy of completing his degree and will do so when the time is right, he said.

After receiving help from Chad Parks, all of Rencountre’s fights have been in Kansas and he is currently 8-0.

His sister, Alexis Rencountre, has made it to all but one of her brother’s fights.

“I am his big sister and I am always going to support him,” she said.

Alexis admits that she always gets nervous before Rencountre fights but then she gets an adrenaline rush once the fight starts.

“Who would of thought a little boy from Pawhuska would make it this far – it is amazing,” she said.

Alexis has watched her brother wrestle from the age of five and believes MMA is just an extension of his athletic career.

Rencountre currently holds two titles. In April, he won the Welterweight Title at the Battle @ the Fort VIheld in Hays, Kansas.

On Nov. 10, he won the Titan Tournament of Champions 2 in Kansas City as well as a multi-fight professional contract. He fought three times that night and in his last fight he fractured his hand.

“In one of the last two to three punches I had before the ref stopped the fight I fractured my hand,” he said. “I didn’t realize it at first but after the fight it didn’t feel right.”

Rencountre was fortunate enough that he didn’t have to have surgery. He instead was put in a cast for three weeks.

His injury allowed him to go to Nebraska to spend time with his girlfriend and on Dec. 6 they welcomed a baby girl into the world.

Rencountre plans to give California another shot.

“I’ve always been competitive and I have to go where the professional competition is, which is California,” he said. “I have to take the bull by the horns and go for it.”

Rencountre said his coaches have been awesome and he has trained with some really good people.

“I’ve gotten the training most kids my experience level haven’t and I have progressed faster than I would at a small gym,” he said.

Things have gone a lot better than Rencountre had hoped and doesn’t want to let anyone down since so many believe in him.

“I never thought it (MMA) would pay off but it has,” he said.  “I am taking it all in as I go, making a name for myself and making everyone proud.”