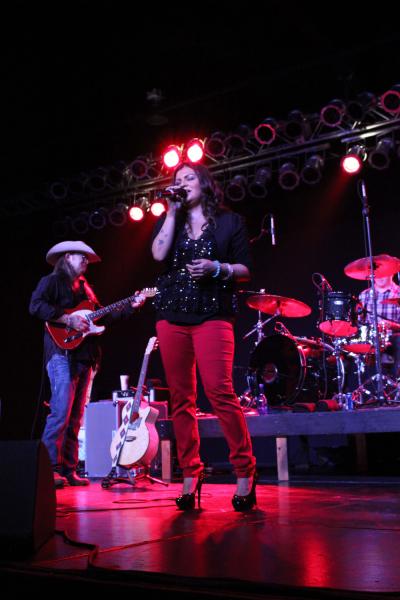 The Osage Nation Foundation hosted their first annual Osage Christmas Celebration Dec. 15 and it was a success.

“The event went well and we definitely had more people than expected,” said Bill Webb, Osage Nation Foundation executive director. “We had right around 150 people who attended.”

Osage Nation Principal Chief John Red Eagle and Osage Nation Congress members were in attendance. As well as individuals involved in the Hominy Indians Football documentary, “Playground of the Native Son,” and “Wahzhazhe: An Osage Ballet.”

“We were happy folks from the Hominy Indians and Osage Ballet were able to attend since we supported both projects with arts grants,” Webb said. “It added a really nice touch to the event.”

The night also included a buffet dinner, a silent auction and a live performance from Ojibwe country artist, Crystal Shawanda.

The silent auction had about 25 items that were donated from individuals and merchants such as the Cedar Chest and the Osage Casinos.

One of the main goals of the event was to raise money for the Osage Nation Foundation’s summer youth campus and cultural and arts programs.

“We are still trying to count up some of the numbers but we are going to be netting somewhere around $12,000 total for the event,” Webb said. “The $12,000 will fund two (camps/programs) for sure and possibly three, depending on the cost of them.”

The ON Foundation ended up making more than they initially thought they would especially since a few weeks ago not many people had purchased tickets to attend the event.

“Overall we had a good turn out,” Webb said. “We got a lot of positive feedback and we are hoping to make this an annual event.”