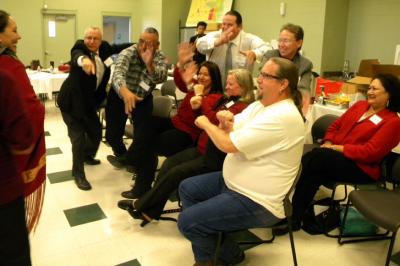 The Association of New Mexico Osages held their second formal meeting in Albuquerque, N.M., Dec. 8, to focus on the Osage culture and voting issues.

The association’s first meeting was held in May, prompted by the June general election, in which seven of the 34 candidates attended. Attendees of the May meeting wanted to follow up issues discussed and also wanted to focus on culture and the Osage language.

Walter Hopper Jr., chairperson of the election board was present to address concerns. He spoke about legislative priorities for the next election, one being to reform the election code and the process for absentee ballots. Hopper encouraged the need for public input. He also announced an upcoming congressional hearing Feb. 12, 2013, with the election board to discuss such issues.

A questionnaire was handed out to constituents and asked fourteen questions about the request process of an absentee ballot as well as election office performance and responses to requests. Congresswoman Edwards told the group that a congressional motion for a task force for government operations would be requested and another questionnaire would be developed which would be given to the New Mexico group first.

Cultural presentations started with Dr. Hunter. She spoke about Osage history including historical migration. Hunter described her work as taking inventory of cultural property and landscape, and developing education and outreach components for the tribal museum. The presentation titled, “The Osages, Children of the Middle Waters, Ni-U-Kón-Ska,” the traditional name Osages called themselves, described the concepts of the name having a deeper meaning to water. Explained was the significance water had on Osage culture, spirituality, social structure, migration and habitation – including the migration from the Chesapeake Bay to the Ohio River Valley and the migration by rivers to the Osage’s current locations.

Jenilee Charley, a constituent who traveled from Gallup, N.M., to attend the meeting found Hunter’s presentation “very interesting” and said she didn’t get a chance to learn much about Osage history until she attended college and had the opportunity to do some research of her own. Charley has an interest to learn the language and more about the culture.

The afternoon presentations began with the representatives from the Language Department.  Lookout presented on the history of Osage language orthography. He talked about the way the language was taught in the 50s and 60s, that stories of everyday life were told and in a humorous manner. “The language got our heart into it, the attitude we have,” said Lookout.

Carpenter gave updates on programs and resources of the language department. Carpenter said, “No one is fluent and our language is in critical danger, each student is vitally important.” Carpenter hopes that current Pawhuska students will be future teachers of the Osage language. Pawhuska is the only school currently teaching Osage in the public school system.

As constituents began to ask questions the discussion evolved to focus on teacher certification and accreditation. Currently the state of Oklahoma has no valid way of certifying Native language teachers. Osage teachers are currently accredited through the Chief and are looking at other tribes as models. Constituents were told to be on the lookout for Oklahoma legislation being introduced in 2013 by the State Department of Education that will address the certification of more Native language teachers.

During the discussion, ideas ranged from immersion schools to incentive programs for students in language programs and long distance learning. Ultimately the growth of programs is based on funding. Congressman Red Corn brought up one issue the Osage congress faces; does the outcome of language programs equal to measures of producing language speakers?

“It’s difficult, these are the questions that arise when budgets are reviewed for programs,” Red Corn said.

Congressman Standing Bear added by saying, “It’s our obligation, so let us know what you think, it’s your money.”

As of November, 200 students were enrolled in the language classes.

Director of Culture, Vann Bighorse presented on the In-Lon-Schka Dances. Currently the Pawhuska dances include approximately 300 male dancers, the arbors are crowded, Bighorse noted this was a good thing and that each village, Hominy and Grayhorse has its own way. Bighorse went on to talk about the etiquette and responsibilities of committees.

“The dances are built around family, don’t add anything and don’t leave anything out” and “we must teach one another, teach our relatives,” said Bighorse. He is currently teaching about clothing, such as Osage belts, roach and moccasin making, and Skype classes may be in the future.

“The presentations were very informative and an educational experience,” said Stefan Esterley, resident of the East Mountains (Albuquerque). “I would like to see more education continue on culture and political branches.”

Esterley’s son Connor Esterley said, “I have learned more about Osage in one year from these meetings than I have before.”

After the many presentations, the group participated in a few social activities, such as hand games and round dancing. Constituent Paul Bemore from Arizona was asked to attend on behalf of Vann Bighorse and sat as a drummer for the hand game and round dance.

“The cultural presentations and hand games, made me feel good,” said Mary Horsechief.

That sentiment was shared by Lily Eagle Elk, one of the youth present, “Attending and getting involved is educational, and it’s good.”

The earlier electoral discussion was continued and the issue of contracting the company True Ballot, to distribute absentee ballot mailings was being questioned. A constituent stated it took 19 days for the ballots to be sent from True Ballot (a Maryland based company) to New Mexico. A second statement by a meeting attendee said that 602 absentee ballots were not returned and that one-third of the voting constituency did not receive ballots; this lead to the speculation that the ballots were sent out late. Congresswoman Edwards responded and told the group that would be hard to determine as there were no postmarks on the ballots and statistics are needed, but it would be looked into.

“I would like to believe in the process, but I don’t and I always drive home to vote in person,” said Jodie Revard, in which many in the room shared the sentiment about the absentee ballot process.

Constituent, Stefan Esterley, stated he did not get his ballot till after the election and in fact left the May Association of NM Osages meeting not knowing what to do about the voting process. Congresswoman Whitehorn told Esterley, “Call us, we’ll find who you need to talk to.”

“I feel partially responsible for the election code, it will always need improvement, no excuses, however after the problems being seen, everything will be looked at, no one is not saying there isn’t a problem but definitely we need to move forward,” said Congressman Red Corn. “We don’t get enough calls, we know there are problems, what we need from you, we need to hear those constructive criticisms.”

Constituent Staci Eagle Elk told Congress members, “It’s still all new, government, leader roles, and constituent interaction. Forums like this will change all that, bringing culture and fellowship, bridging the gap both culturally and politically, thank-you for coming and hearing our feedback.”

In addition to electoral issues, the discussion turned to re-districting as Congressman Red Corn introduced a proposed plan to constituents.

“I am encouraging Osages to have the conversation, a conversation that will go past the next election,” said Red Corn

Red Corn clarified, “District, meaning voting/political district, not in the cultural context,” referring to the Osage cultural districts of Grayhorse, Hominy and Pawhuska.

Congressman Standing Bear said, “Districts may be the wrong word to use, maybe we should call them regions,” and told constituents, “best not ignore this issue, get your thinking in, might come to a vote in the future.”

Maps were handed out outlining the proposed voting districts. Constituent Jodie Revard commented, “It (re-districting) has been brought up for a long time, I recommend everyone look at the map.”

Constituent John HorseChief asked, “Will this be a vote by Congress or the people?” Red Corn responded, “It should be by the people.” Standing Bear added, “It will first go to Congress to vote, then to the people to vote.”

Bemore was shocked to find out about the ballot issues experienced by others, he received his ballot on time, but questioned congress about where was an investigation into those electoral issues.

Re-districting plans were met with a mix response, “Re-districting, the pros and cons need to be presented, technically I am not for it, but I need to see more, it’s going to be very relevant,” said John HorseChief.

Richard Chissoe said, “I like the idea of re-districting, you have to represent equally, no representation of a particular group, affirmative representation, I do like that aspect of the idea.”

“There are no set rules on re-districting, it will be up to individuals and their input,” said Red Corn, he also said this was the first formal presentation of the idea outside of his e-mail correspondence with about 250 constituents and that re-districting has been a constituent request over the years. When asked how his colleagues felt about the idea of re-districting, Red Corn said, “There is healthy skepticism about the plan, it’s too early to tell.”