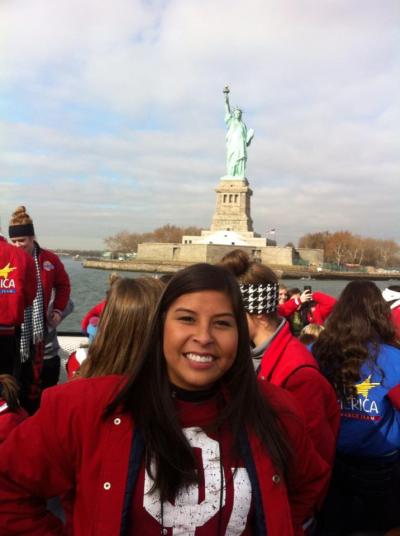 To say that Dresdyn Hinman had a good time in New York City during Thanksgiving is an understatement.

The 17-year-old Osage performed in the 86thMacy’s Thanksgiving Day Parade along with approximately 600 other all-star cheerleaders and dancers from across the country. But, at the end of the day, the one thing she still remembers from that experience was that her feet hurt.

“It was exciting, I had a lot of fun,” she said. “I was nervous at first because I was feeling by myself and didn’t know anybody, but it was nice to meet new people, it was a good experience, it was fun.”

Hinman was performing with Spirit of America productions and took in the Big Apple with her mother Stephanie Hinman, grandfather Fi Davis and grandmother Karen Carter.

“When we first got there we had a night practice, practiced almost all day on Sunday (Nov. 18). It was just exciting finally getting there and performing,” she said.

Hinman, a senior, is an All-Star cheerleader from Hominy, as well as a 2011 State Champion, and has been cheering since the 4th grade. The all-star distinction comes from the Jeff and Craig’s Oklahoma Twisters All-Stars cheerleading camp held in Norman, Okla., every summer.

When not practicing for the parade, Hinman and the other performers went on tours of the Big Apple. She saw the Statue of Liberty, the Empire State Building, she saw the Radio City Rockettes Christmas Spectacular and attended a Broadway musical. She wasn’t too wild about the all of the diverse food but watching parade organizers blow up the balloons and work on parade floats the night before was an experience, “that was cool.”

The morning of the parade they had one more practice and then they had a long wait before the parade actually started. Where she was positioned, she was in the middle of the other dancers in her group and she couldn’t see anything around her.

“There was a ton of people there. It was all girls except for one guy that performed with us,” she said.

Now that she is back in Hominy she is cheering for basketball season and keeping up with her responsibilities as the 2012-2013 Red Ribbon Powwow Princess. Hinman is also Chemehuevi, Pawnee, Omaha and Winnebago. She was recently named Buck Queen, a special distinction for the school’s yearbook. Nominated by her senior class, she was voted the winner by the entire high school.

She still plans to pursue higher education and play softball at a small university. She hopes to receive a scholarship and study nursing upon graduation.

Of the experience to perform in the Macy’s Thanksgiving Day Parade she is “grateful,” and says that she would do it all over again.