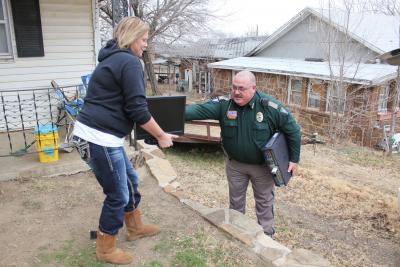 When Osage Nation Police Officer Mike Anderson greeted Teresa Johnson at her house, Johnson thought something bad had happened but she quickly realized it was good news.

Anderson opened the back of his patrol car and presented Johnson with an early Christmas present, a computer.

Johnson’s eyes lit up and she was beside herself. With a big smile on her face, Johnson motioned Anderson to bring the computer inside her house.

“I had no idea I would be getting a computer today,” she said. “I am so excited and my grandkids will be too.”

Johnson is currently raising her two grandchildren who are Osage. They are four and seven years old.

PC Power, a local non-profit organization, teamed up with the TPD and provided the refurbished computers. Tulsa Police Officer Glenn DeWesse, who began building computers for needy children as a Christmas project in 2003, founded PC Power.

Anderson said this is the first time that ONPD has participated in any project like this and was delighted to take part in it.

“It is a pretty neat deal to get involved with,” Anderson said.

Anderson, with help from the Osage Nation TANF Program (Temporary Assistance for Needy Families), was able to give six Native American families computers for Christmas.

He delivered five of the computers on Dec. 20.

“It felt good to be able to help someone out and it’s enjoyable to give back to the community,” Anderson said.

The ONPD saw this project as an opportunity not only to give back but as a way to let people see them in a positive light.

“We want to show that we are not only there on people’s bad days,” Anderson said.

For Brian (Osage) and Misty Hight (Pawnee), they definitely got the chance to see ONPD in a positive light.

The Hights have six children and getting a computer was a big surprise for them.

“Our kids will be so happy and it will be a big help,” Misty said.

The computer will also help Brian who is going to school. He said maybe now he can take online courses.

Karen Ford, executive director of PC Power and a retired Tulsa Police Officer, was glad the ONPD joined the project this year.

Ford said PC Power is always looking to expand each year and a board member asked about tribal agencies getting involved.

Ford thought it was a good idea and had Lisa Ford, a PC Power board member and a law enforcement liaison get in contact with surrounding tribal agencies.

“Lisa got in touch with surrounding tribal police agencies (Osage and Cherokee) and they jumped at the opportunity,” Ford said.

Also, Ford hopes by having tribal police involved they can be able to reach more people.

“For us we looked at the fact that there are people that fall under their jurisdiction that we might not be able to reach,” she said. “It is a very workable partnership and we plan to ask the Osage Nation Police Department to join us again next year.”