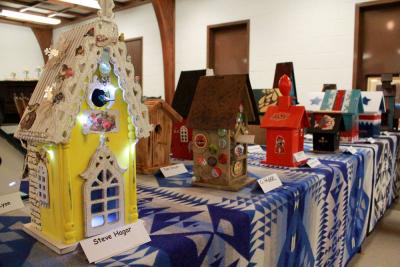 It isn’t a turnout one hopes for when a group is having a birdhouse auction to raise money for abused and neglected Native American children and there are more birdhouses than bidders.

The Pawnee/Osage Court Appointed Special Advocates (CASA) office raised approximately $4,700 Dec. 13 at their annual Birdhouse Auction fundraiser, held at the Pawhuska Immaculate Conception Catholic Church. The fundraiser was to raise money to pay for rent for two offices, one in Pawnee and the other in Pawhuska, and salaries for two employees. The rest of the operating costs for the non-profit are provided for by a grant.

The auction featured 45 donated birdhouses and other items. About 25 people attended in which about 10 of the 25 are affiliated in some capacity with CASA.

“I’m a little bit concerned with the crowd tonight, you know what I’m talking about,” said Jim Taylor to the attendees about the low turnout, a local auctioneer who volunteered his time for the benefit. “This is new to me, not to have a crowd for a benefit … and this is a wonderful cause.”

There are 11 CASA volunteers in Osage County with six of them being Osage citizens. The volunteers are assigned to abused and neglected Native American children in the Osage County or Osage Tribal Court system and they monitor their living situation, school activity, and general well-being and report directly to the judge handling the child’s case.

Terry Mason Moore, an Osage attorney, is chairwoman of the Pawnee/Osage CASA Advisory Board and previously served as a Pawnee Nation trial judge. She said the written reports and recommendations made by CASA volunteers made a difference in the cases she heard involving children.

The other Pawnee/Osage CASA office employee, Nicki Revard Lorenzo, was unable to make the auction after breaking one of her legs in six places. Her husband Frank Lorenzo donated birdhouses for the event.

Taylor set a minimum bid of $20 for the birdhouses, so as not to “offend” any of the artists that donated which included Osage artists Gina Gray, Joe Don Brave, Wendy Ponca, Anita Fields, Ryan Red Corn and others.

Osage County Judge Stuart Tate was one of the big bidders of the night as well as Osage Nation Supreme Court Chief Justice Meredith Drent, Osage tribal member LeeAnn Ammons, owner of The Cedar Chest shop Danette Daniels and CASA volunteer Rick Luttrell (who often donated back the birdhouses he won for re-bid).

“My specialty at my practice in California was child welfare and my husband is a CASA volunteer, so it’s a cause very dear to our hearts,” Drent said to the attendees. “I plead with all of you to get the word out there about the good work done by these CASA volunteers … I am dedicated to this organization and the Osage Nation Court is dedicated.”

Despite the low turnout Taylor said he was impressed with the final outcome.

“I want to tell everyone Thank You because this auction is going a lot better than I thought it would when we first started,” Taylor told attendees. “There’s a very giving spirit here tonight.”