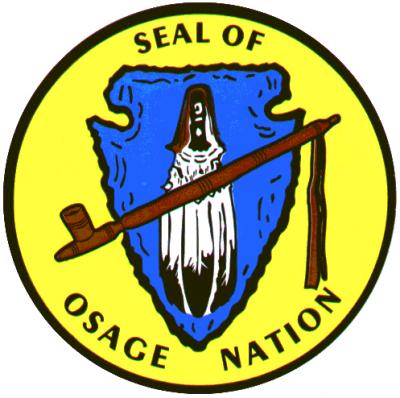 From elections to rising Osage artists, 2012 was an eventful year for the Osage Nation. Here are some highlights we have compiled for you. The staff at the Osage News would like to wish all our readers a Happy New Year!

-       Sand Springs Casino gets a makeover with a new lounge area, full-service bar, dance floor and stage. The high stakes playing area also gets a renovation.
-       A federal judge rules against the Nation in the wind farm fight, allowing the project to move forward.
-       Court Appointed Special Advocates gets a low turnout for their birdhouse auction fundraiser but is blessed with an anonymous donor who gives them $37,000 to stay afloat.
-       ON Congress authorizes the Nation to borrow money for the first time, allowing Osage Casinos to seek a loan for $27.1 million.
-       Roman Catholic Church Pope Benedict XVI announces that Kateri Tekakwitha will become the first Native American saint.

-       The Second Osage Nation Congress gives $550,000 to the Grayhorse Five Man Board to begin design and construction for a new roundhouse.
-       A Select Committee of Inquiry is formed to investigate Treasurer William Kemble on whether or not he was negligent of his duties and should be removed.
-       Leonard Maker, a member of Principal Chief John Red Eagle’s executive staff, passes away in his office at the age of 64.
-       Palace Grocery Store is listed for auction.
-       Second Osage Minerals Council and Chief Red Eagle file an appeal against the Wind Farm decision.
-       An increase in health benefits for Osages 65 and older passes with the Second Osage Congress to make their benefit $1,000.

-       Treasurer William Kemble resigns from office and turns over financial records to the Osage News that shows Chief Red Eagle paid for a non-Osage non-Osage Nation employee to accompany him to the National Congress of American Indians conference in Portland, Ore.
-       The Second Osage Minerals Council and Chief Red Eagle drop the appeal in the Wind Farm case.
-       Osage Nation Election Office begins town halls on the reservation to discuss the upcoming congressional election.
-       Osage boxer Ben Cottingham competes in USA Boxing National Championships. He is disqualified in the first round.

-       Thirty-four candidates register for the 2012 Osage General Election that will decide six seats on the Third Osage Nation Congress.
-       A congressional bill sponsored by Congressman Geoffrey Standing Bear calls for the dissolution of the Osage LLC – it’s voted down.
-       Cherokee Nation citizen Callie Catcher is named the Nation’s new Treasurer and confirmed by the Second Osage Congress.
-       Chief Red Eagle gives his 2012 State of the Nation address at Osage Sovereignty Day March 9. Promises to move forward with Campus Master Plan, preserve Osage language and culture, restore unity to the Osage Nation, improve internal operations and implement the merit-based performance system, and more.
-       Bill Mashunkashey Sr., Osage veteran and elder, is honored by the Osage County District Court for his many years of service.

-       The six Osages elected to the Third Osage Nation Congress are inaugurated July 4.
-       Osages discuss proposed changes to Osage Constitution to be voted on in a Aug. 13 Special Election.
-       Osage LLC transfers ownership of Palace Grocery store to the Osage Nation.
-       Plans move forward for expansion projects for the Ponca City and Skiatook Osage Casinos.
-       Osages included in Code Talker coins issued by the U.S. Commission of Fine Arts. But it is unclear if Osages were code talkers in WWII.
-       Rose “Sudie” Clevenger turns 105, making her the oldest living tribal member.

-       All four proposed constitutional amendments fail in Aug. 13 Special Election.
-       Raymond Red Corn is named Speaker of the Congress. He is the Nation’s fourth Speaker since the formation of the new government in 2006.
-       David Kimber and Doyle Smith are honored for their service in WWII. Kimber for his service as a U.S. Navy Seaman First Class and Smith as a U.S. Army Master Sergeant.
-       Confusion remains on whether or not Osages were code talkers in WWII. A verification process is asked for.
-       Wahzhazhe: An Osage Ballet opens in Bartlesville and Tulsa.
-       Osage Nation Child Support office is recognized for its work.

-       Mobile farmers market offers Fairfax area a temporary food outlet in lieu of a permanent grocery store.
-       Pawhuska Indian Village residents elect an all-women board. Board vows to clean up the Pawhuska Indian Village. The investigation is ongoing into the practices of the former chairman Joe Don Mashunkashey.
-       President Barack Obama nominates Vince Logan (Osage) as the Special Trustee for American Indians. Logan will oversee the OST which is accountable for about $3.7 billion in tribal trust funds and Individual Indian Money (IIM) accounts.
-       Demolition is completed on the Grayhorse arbor.
-       Hominy High School cheerleader, Dresdyn Hinman (Osage), is offered a chance to cheer in the 86th Annual Macy’s Thanksgiving Day Parade. The only known Osage to do so.
-       Osage elders Steve Pratt and Herman “Mogri” Lookout are honored by AARP Oklahoma in a ceremony in Oklahoma City.
-       Saint Kateri Tekakwith is canonized by Pope Benedict XVI and Pawhuskans honor her at the Pawhuska Immaculate Conception Catholic Church.

-       FBI is called in to investigate the former Pawhuska Five Man Board after more than $800,000 of the Village’s revenue is unaccounted for.
-       Kimberly Craven’s appeal to the U.S. Supreme Court, that held up the payment of the historic Cobell case and drew ire from thousands of Native Americans, is dismissed.
-       A new group of Court Appointed Special Advocates are sworn in so they can monitor Osage children’s cases in the Osage Nation Tribal Court.
-       Former Osage Nation Supreme Court Chief Justice Charles Lohah passes away Nov. 22 at the age of 78. He died from complications from lung cancer.
-       John T. Moncravie donates artifacts to the Osage County museum, has a room in the museum dedicated to him.
-       The Third Osage Nation Congress considers a resolution to borrow $10 million for the campus master plan.
-       Osage News video of Skiatook High School Ashley Ghazal is highest viewed Osage News video of the year. Ghazal is an up-and-coming artist.
-       Osage entrepreneur and Osage Nation Foundation board member, Julie O’Keefe, announces she is bringing a manufacturing company to Pawhuska to create jobs called NDN Manufacturing.