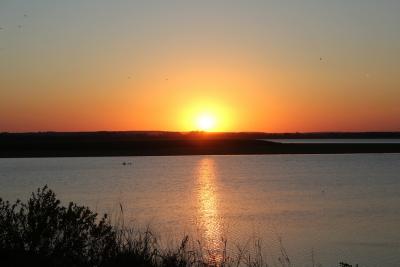 The Osage Nation plans to have monthly events at the Wah-Sha-She State Park starting in March.

“We are going to have something every month,” said Raymond Lasley, Osage Nation Executive Advisor of Programs. “We want to attract people to come to the park at least once a month.”

Lasley said the Osage Nation Executive Branch plans to have a community meeting at Hulah Lake in mid-February to work on an event calendar.

The park closed for the winter on Dec. 21 and will reopen on March 1.

The Osage Nation will host a two-day concert on March 2 and 3 called, “The New Utopia.” The concert was supposed to be held in November but due to bad weather the nation had to reschedule it.

The concert will have three bands on each day and Rick Geisler, the Wah-Sha-She State Park manager, is working on finalizing the band list.

Even though the park is closed for camping, people are still allowed to drive through the park. Geisler said he has spotted eagles at Hulah Lake.

“I see 15 to 30 cars a day drive through the park looking for the eagles and other wild life,” he said.

The 1,100-acre park in northeastern Osage County was one of seven state parks closed in 2011 due to state government budget cuts.

The state’s Tourism and Recreation Department partnered with some local entities to take over those affected parks. However, Wah-Sha-She State Park closed October 2011.

It reopened in May 2012 when the Osage Nation assumed control of the state park after Osage Nation Principal Chief John Red Eagle signed a contract with the U.S. Army Crops of Engineers to maintain the park.

The ON Executive Branch held a community meeting last September to let community members voice their concerns and suggestions.

The new rates are $25 for the storm shelter, $16 for improved sites with water and electric, $12 for tent sites and $8 for seniors.

The nation held two events in the fall of 2012 at the park.

The first event was called Trade Days that was held on Oct. 6 and 7. The event had various vendors and items for sale.

The second event was a Crappie Fish Tournament for adults and children. The event attracted more children than adults but everyone had fun, according to Geisler.

“The kids had a good time and we gave away various prizes like fishing poles,” he said.

Geisler said he was happy with the attendance for both events as well as people coming to the park in general.

“We’ve had a great turnout of people clear into December,” Geisler said.

This year the ON plans to have an Easter egg hunt in March, two Crappie Fish tournaments and possibly cultural events with singers and dancers, Lasley said.

“I hope we can try and have two Crappie Fish tournaments this year as well as an event during hunting season,” Geisler said.

Also, a haunted Halloween walk and a Christmas light show are scheduled for this year.

“We want people to come out this year and enjoy the park,” Geisler said.