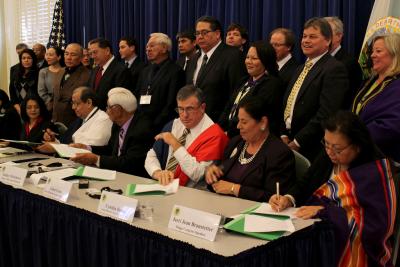 An Osage shareholder of non-restricted status received a refund on the taxes she paid in 2011 for the Osage Trust Case Settlement. It has many wondering: should she have? And if not, will she have to pay it back?

Fiduciary Trust Officer for the Eastern Region of the Office of the Special Trustee, Brian Ross, said she was supposed to be taxed for the settlement and she should not have received a refund due to the settlement agreement. The agreement said those shareholders of “competent,” non-restricted status would pay tax on their settlement award just as they had always paid taxes on their royalty payments.

The shareholder, who wished not to be named for this article, said she consulted with her accountant on whether or not she should have paid taxes for the settlement award, since the Claims Resolution Act of 2010, H.R. 4783, specifically prohibited settlement awards from being treated as gross income or a resource. Her accountant did some research, filed an amended tax return with articles attached that referenced the Claims Resolution Act and the Cobell settlement, in which tribal members receiving the Cobell settlement are specifically prohibited from being taxed.

The IRS quickly processed her refund and she’s had it for one month. She said she would pay it back, with penalty if she had to, but she wanted others to know she received a refund.

The Osage Trust Case settlement was the result of an 11-year legal battle that ended after months of negotiations with the U.S. government and a U.S. Court of Federal Claims ruling that awarded the Osage Tribe approximately $330 million for the historical losses to its trust funds and interest income as a result of government mismanagement of trust assets for claims arising from 1972 to 2000. Shareholders, Osage, non-Osage or entity, received $155,136 per full share.

David Stell, IRS spokesman for Arkansas and Oklahoma, said he spoke with the Indian Tribal Governments Office within the IRS and said the distinction of whether or not to tax an Osage shareholder doesn’t come from the IRS, it comes from the Office of the Special Trustee.

“Firstly, under privacy and non-disclosure law (26USC§6103), it is against the law for me, or any IRS employee, to comment on or discuss a specific taxpayer's tax information or relationship with the IRS. This would include hypothetical circumstances that could be construed as comment or discussion about a specific taxpayer. Therefore, I cannot discuss nor comment on any individual tribal member's tax matters, but I can provide you the rule and law applicable to the Osage Tribe case settlement you asked about,” he said. “Revenue Ruling 77-78 (http://www.irs.gov/pub/irs-tege/rr77_78.pdf) discusses the taxability of headright income from tribal mineral interests received by Osage Indians. The tax consequences vary depending on whether the money is received by a ‘competent’ Osage Indian (taxable) or ‘non-competent’ Osage Indian (non-taxable). This determination is not made by the IRS.

Ross, who was the Fiduciary Officer for the Osage in 2011 and has since been promoted to cover the entire eastern region and the Osage, said that the OST held financial education workshops in the Nation’s three districts and the meetings were recorded and broadcast on the Nation’s website.

In those workshops he told shareholders their settlement award would be taxed if they did not change to “non-competent” status. For a shareholder to change their status they need to fill out a form and send it back in to the OST.

“For 2011 the OST recognized any change for the entire year for tax purposes,” Ross said.

When asked why shareholders weren’t mailed literature explaining the tax implications, he said:  “I was very active at the time conducting financial education workshops locally and the tribe was cooperative in terms of recording these sessions and broadcasting them to reach Osages outside of the county. There was not literature per se that we were able to produce; largely because we’re not in a position to offer tax advice. The prevailing view was that this was something that would be offered up by the plaintiff’s attorneys.”

Washington D.C.-based attorney and shareholder, Wilson Pipestem, who was also the Nation's attorney for the case, said he personally received a tax opinion that “non-competent” shareholders’ settlement awards would have to be taxed since shareholders who receive royalty interest from the Osage Minerals Estate are so diverse.

“By design, the Osage Trust Settlement does not address taxability of the settlement income to headright holders. Headright holders are a diverse group made up of restricted and non-restricted Osages, Osage Nation members and non-Osage Nation members, Indians of other tribes, non-Indians, churches, and others. Because the funds from the settlement were paid into the Osage trust system, in accordance with the 1906 Act, all of the headright holders received a payment. As a result, the different categories of headright holders will have different tax obligations based on federal law,” he said. “Funds from the Cobell settlement are different. By definition, all persons receiving funds from Cobell are Indians with IIM accounts. Not all Indians get a Cobell payment. Congress ratified the Cobell settlement agreement and made clear that the Cobell payments would not be taxable income.”

But there is still the question as to why one Osage shareholder, possibly others, received a refund.

Pipestem said he would advise those seeking a refund to consult with Tax counsel.

[Editor's Note: This story was clarified Jan. 21, 2013, to reflect a correction to statements made by Wilson Pipestem.]