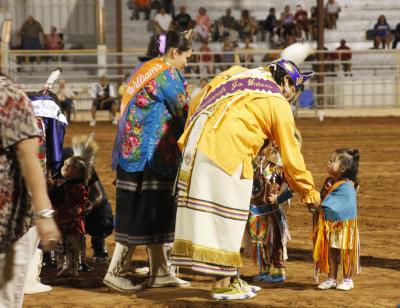 ON Prevention striving to improve lives of Native youth

“As of now, we have identified a curriculum and are currently setting up trainings for mentors,” said Peaches Hail, Osage Nation Prevention Specialist.

When the Osage News first reported on the program in August 2012, the ON Prevention Program was in the planning stages and recruiting mentors. Currently, nine mentors and two mentees have signed up for the program.

The first training is Jan. 25 and the ON Prevention Program will be using the 7thGeneration mentoring model and adapting appropriate areas to be gender and Osage specific, Hail said.

The Strengthening Native Girls Program is geared toward young Osage women living in Osage County, ages 12-17 at high-risk of being exposed to alcohol and drug abuse.

In 2011, the Osage Nation received $1.9 million in grants from the U.S. Department of Justice.

Of the $1.9 million in grants, the ON Prevention Program received an award for a three-year $500,000 grant to address problems in limited avenues for prevention and intervention services to teach young Native American women appropriate life management skills.

“We (ON Prevention Program) will be working with local schools and justice systems as well as any other organization that might be interested in using the mentor program as a resource for the Osage girls they serve,” said Daisy Spicer, ON Prevention Programs coordinator.

In addition, the ON Prevention Program wants to include other tribes with a potential curriculum called, “Daughters of Tradition.”

“‘Daughters of Tradition’ has been identified as a possible curriculum that can be used for a group setting of Native girls, not Osage specific,” Hail said. “We plan to set up groups that will meet one time per week.”

Spicer said the curriculum is not set in stone but the project would be for individuals who might not want to mentor, but instead teach a curriculum to a group of Native girls also between the ages of 12-17.

“There have been 10 Native American women who have signed up to be facilitators for this curriculum,” Hail said. “A training date has not yet been set for this project.”

The ON Prevention Program is still looking for mentors and facilitators.

Suicide second leading cause of death among Native youth

Adolescent American Indian/Alaska Natives have death rates 2 to 5 times the rate of Whites in the same age group, resulting from higher levels of suicide and a variety of risky behaviors, according to the Substance Abuse and Mental Health Services Administration (SAMHSA).

Suicide is the second leading cause of death – and 2.5 times the national rate for American Indians/Alaska Native youth in the 15-24 age group, according to the Center For Native American Youth at the Aspen Institute.

For more information on becoming a mentor or facilitator contact the Osage Nation Prevention Program at (918) 287-5595.