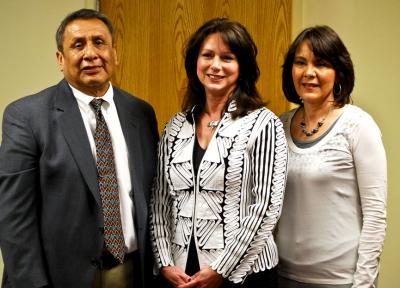 The Osage Nation Election Office is seeking voter input on the tribal election process as it considers possible amendments to the election law.

The ON Election Board is mailing a questionnaire to 12,000-plus Osage voters with 19 questions regarding demographics, absentee ballots, and asks for suggestions on how to improve the voting process. The questionnaire was mailed out Jan. 18.

The questionnaire seeking information is one avenue for Osages to have a voice in improving future elections. Another opportunity is for Osages to participate in the election process hearing scheduled Feb. 12 at 6:30 p.m. at the ON Congressional Chambers in Pawhuska.

Voters interested in participating may attend the hearing in-person or leave their feedback via phone, email or Facebook message on the “Osage Nation Election Office” page. Those who cannot attend may also watch a livestream of the hearing, which will be broadcast on the Nation’s Web site at www.osagetribe.com.

Election Supervisor Alexis Rencountre said the questionnaire feedback could be used as an educational tool to make people aware of upcoming election activities.

The Election Board approved the questionnaire for distribution at its Jan. 16 meeting. The questionnaire and hearing initiatives offered by the ON government come after hearing concerns from Osages on the voting processes, absentee ballots and election day activities.

Suggestions generated through voter feedback would be considered for amendments to the Nation’s election code last revised in 2011 by the Second ON Congress. The election code (ONCA 11-40 sponsored by now-Congressional Speaker Raymond Red Corn) contains revisions including a call for a primary election if there are more than two candidates running for the Executive Branch’s two elected offices with the primary election to take place in April of that even-numbered election year.

According to the questionnaire, voters will be asked the following:

·      Do you know that in April of 2014 there will be a primary election for Principal Chief and Assistant Principal Chief if there are more than two candidates for each position?
·      Would you prefer to be a permanent absentee ballot voter and automatically receive a ballot for every election?
·      Were you satisfied with the absentee ballot process the last time you voted? If not, why?
·      How do you think we can improve the walk-in voting process?
·      How do you think we can improve the absentee ballot voting process?

As an incentive for participating in the questionnaire and hearing, the Election Board is offering those who mail in their questionnaire form or offer feedback for the hearing a chance to win a $50 Visa gift card or a Pendleton blanket. The winners will be announced during the Feb. 12 hearing.

Congresswoman Maria Whitehorn, who is chair of the government operations committee, said she believed it would help for the Election Board to “incentivize” the events to attract participants. The board approved of the idea and developed the gift card and Pendleton drawing rules at its Jan. 16 meeting.

Voters who participate in the hearing or submit a returned questionnaire with a Jan. 30 postmarked date on the enclosed return envelope will be entered into drawings to receive a gift card and the Pendleton blanket.

Election Board Chairman Walter Hopper said drawings for the gift cards and Pendleton will be held within the last 20 minutes of the hearing.

Those who mail their questionnaires back to the Election Office with a Jan. 30 postmarked date will be entered into the drawings. For a gift card, five names will be drawn from the group of names who sent in the questionnaire.

All who participate in the questionnaire or hearing will be entered into the drawing for the Pendleton blanket.

Those who participate in the hearing must leave their name, address and phone number to be entered into the prize drawings.

Election Board meetings are regularly held on the third Wednesday of each month at 1 p.m. at the Election Office, 608 Kihekah in Pawhuska.

CORRECTION from Osage Election Office: The mailing list used included minors by mistake. This issue is already fixed for future mailings. Only Osage members of voting age that submit surveys will be eligible for the drawings and have their results recorded. Sorry for any inconvenience this may have caused.

[Editor's Note: This story was updated Jan. 27, 2013 to reflect the Correction from the Osage Nation Election Office.]