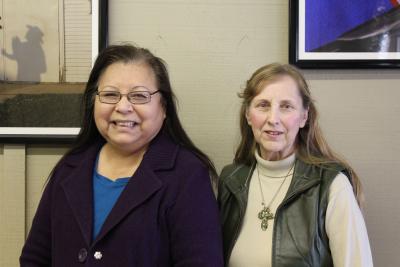 The Osage News Editorial Board is comprised of two appointed members selected by the executive and legislative branches of government.

By majority vote, the Third Osage Nation Congress selected former Congressional Speaker Jerri Jean Branstetter for its interim appointment to the board during the Tzi-Zho Session last fall. In December, Principal Chief John Red Eagle appointed Lu King for his branch’s selection for the three-member board.

King and Branstetter are serving interim terms as both board positions are subject to Congressional confirmation votes during the next regular session of Congress. The Hun-Kah Session starts its 24-day run on March 25.

Branstetter also served on the tribe’s government reform commission and is retired from working in Oklahoma state government.

King is director of the Pawhuska Public Library and a former weekly newspaper owner.

According to the Nation’s 2008 Free Press Act (ONCA 08-07), The Editorial Board is formed with two board appointments each made by the Legislative and Executive branches and those two members are subject to Congressional confirmation. The two confirmed board members then appoint the third board member.

King and Branstetter have yet to decide on a third Editorial Board member.

Editorial board qualifications include: be at least 25 years old; have quality experience in management and operations of publications; be of good character and have a reputation of integrity; be physically able to carry out board duties; have at least five years of professional journalism experience and/ or an advanced degree in journalism; adhering to standards of accepted journalism ethics defined by the Society of Professional Journalists and endorsed by the Native American Journalists Association.

Editorial board duties include: to establish and enforce an editorial policy that will be fair and responsible in reporting news of Osage concern; to ensure the operational structure is sound and the board duties and obligations are fulfilled; to review advertising rates and policies; and to develop fair and reasonable policies on campaign advertising to be published 60 days prior to filing period.

In December, Branstetter and King agreed to set a regular monthly meeting schedule with the Editorial Board to meet on the third Thursday of each month at 1:30 p.m. with those meetings to be held at the ON Election Office at 608 Kihekah – across the street from the Osage News office in Pawhuska.