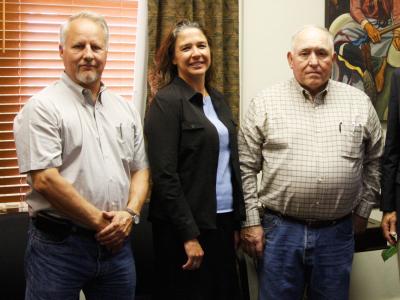 Chief Red Eagle appoints four people to ONES LLC Board

The board comprises five positions with four appointees taking their board oaths on Jan. 14: Jill S. Jones, Randy Standridge, Charles “Chuck” Hessert and Mark Simms. The four board members are subject to Congressional confirmation during the Hun-Kah Session starting March 25.

The ONES LLC Board originated as a revamped Osage Nation Enterprise Inc. Board last summer with Jones, Standridge and Hessert appointed in July. But the board was not confirmed by the Third ON Congress over concerns the board was not properly established as an LLC entity under the Nation’s Limited Liability Companies Act (ONCA 08-02). According to the LLC act, a joint resolution approved by the Congress and Principal Chief is required for the Nation to form an LLC, which was not created at the time.

In wake of the concerns, Jones, Hessert and Standridge worked with Congressional members to create Congressional resolutions to establish and define duties of the board renamed the Osage Nation Energy Services (ONES) LLC Board. Congress passed resolutions to adopt articles of operation and articles of organization for ONES in September and December by majority votes.

ONCR 12-20 is the resolution stating that Congress authorizes the formation of the ONES as an LLC under Osage law. ONCR 12-26 lists the ONES formation and purposes, which include:

·      To profitably provide services to pipeline and oilfield exploration and drilling projects primarily operating within Osage County. This would also include any related service required by pipeline and oilfield projects such as construction, operational services, material supply and distribution, general contracting and project management.
·      To create and stimulate the economy of the Osage Nation and to create employment opportunities for tribal members.
·      To engage in any lawful business or other activities necessary, customary, convenient, or incident thereto for which LLC’s may be organized under the act.

Jones, Standridge and Hessert each have professional experience in the energy sector, according to their biographies posted to the www.osagetribe.com Web site. Simms is a former ON Congressman and longtime business owner in Bartlesville.

·      Jones (Osage) has 22 years of experience in the petroleum industry with a focus on information technology. She began her career at CITGO Petroleum in Tulsa where she held system analyst positions in petroleum refining, marketing, trading, and transportation. She later worked for Ernst & Young as a management consultant in their Energy & Utilities sector. For the past eight years, she has worked at ConocoPhillips in Bartlesville as a Senior Data.
·      Hessert (Osage) retired from ConocoPhillips in 2004, with over 30 years of experience in project management and quality assurance. During his career, Hessert handled all phases of new construction from initial conception through successful startup. He also owns and operates the WAH-TSA-MOIE Angus Ranch and an independent oil and gas company called Hessert LOC Inc.
·      Standridge (Cherokee) retired from ConocoPhillips in 2010 after a 31-year career. His area of expertise includes procurement and warehousing operations for upstream and downstream energy organizations. He has extensive experience in contracts and negotiations.
·       Simms was elected to the First ON Congress in 2006 and served a six-year term. He founded Accent Pest Control Inc., which has grown to be the largest independently owned company in Bartlesville, and also founded Bartlesville Properties, Inc.

The fifth spot on the ONES LLC Board remains vacant. Debra Atterberry, senior executive advisor for Chief Red Eagle’s office, told the board that resumés of prospective board members are being considered for the fifth spot.

On Jan. 14, the four board members were individually sworn into their positions at the ON tribal courthouse. Associate Judge Lisa Otipoby Herbert presided over the oaths.

The board then convened for its first ever meeting immediately following the swearing-in ceremony at the Executive Branch office. Like other boards and commissions, the ONES LLC Board meetings are open to the public.

The board elected its officers with Jones serving as board chair, Hessert as vice chair and Standridge as secretary/treasurer. The board then voted unanimously to set regular monthly meeting dates.

The ONES LLC Board will meet on the second Monday of each month at 6 p.m. The primary meeting venue will be the Executive Branch conference room, but the board members said they might also meet in Bartlesville on meeting days, if necessary. The board said they would post the meeting time and location on meeting notices published, per the Nation’s open meeting law.

Also on the horizon for the ONES LLC Board is an operating budget subject to Congressional approval, which includes board member stipends and office necessity costs. The budget must be considered as a piece of legislation when the Congress convenes for its next scheduled session – the Hun-Kah Session.

The ONES LLC Board has been invited to meet with the Osage Nation Congressional Commerce and Economic Development Committee on Jan. 30 at 10:30 a.m. at the congressional chambers. The purpose of the meeting, according to an email to Principal Chief John Red Eagle from Osage Congressional Speaker Raymond Red Corn, is to discuss appropriate roles of Minerals Council officials and Executive contractors in business dealings related to Osage Nation Energy Services.

According to the email, Red Eagle is invited to present his official position on the matters and to answer questions from members of Congress. The following people were also invited to attend: