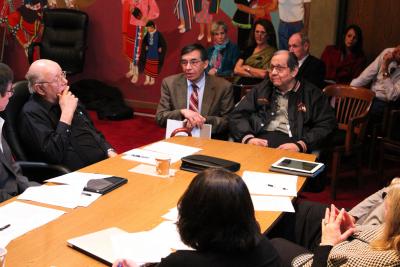 The newly created Osage Nation Energy Services LLC board is letting it be known that Rod Hartness and Osage Minerals Councilman Myron Red Eagle are not welcome when it comes to making their business deals for the Nation.

The ONES board is alleging Hartness and Councilman Red Eagle are meddling in their business to the detriment of the Nation. And, they are alleging Osage Nation Principal Chief John Red Eagle is to blame.

“I hired this consultant (Rod Hartness) to advise me and I have yet to interfere in their (ONES) business, I haven’t made any suggestions,” Chief Red Eagle said to an Osage congressional commerce committee Wednesday, Jan. 30. “I am not politically influencing the board.”

The two-page letter sent Jan. 21 asked Chief Red Eagle to make Hartness and Councilman Red Eagle “cease and desist” from representing themselves as ONES “primary contacts.”

“These two individuals (Hartness and Councilman Red Eagle) and any other unapproved persons shall immediately cease and desist any dealings on behalf of ONES. No one shall represent ONES or engage in any activity on behalf of ONES without proper approval of the Board,” Jones wrote in the letter.

“If any unapproved activity on behalf of ONES continues to occur, the Board will seek relief through proper procedures with the Attorney General’s office and tribal court,” she wrote.

Jones said the board’s job was to explore business opportunities and generate income for the Nation. She also copied the letter to ON Attorney General Jeff Jones (her older brother).

Currently, only four out of five board members have been appointed and sworn in to the ONES board. They are former Osage Congressman Mark Simms, Randy Standridge, Charles Hessert and Jones. Chief Red Eagle has yet to appoint a fifth board member.

ONES Board Chairwoman Jill Jones gave a quick report to the committee outlining current projects, which include two business opportunities with Enbridge Pipeline and Consolidated Power Services.

“Enbridge has expressed concern,” Jones said about the internal conflict between the board, Hartness and Councilman Red Eagle.

“To be honest, it kind of makes us look foolish … we’ve spent a lot of time with these folks, establishing this relationship, from a business perspective,” she said. “We need to be the single contact with Enbridge. This is our project – our stake in the ground, to see us move ahead.”

According to Jones and other board members, a typical situation would consist of Hartness or Councilman Red Eagle calling Enbridge Pipeline for a meeting and then running the meeting as if in charge of ONES business.

One such meeting occurred Friday, Jan. 25, when Councilman Red Eagle told theOsage News after a Bureau of Indian Affairs Negotiated Rulemaking Committee meeting at the Wah-Zha-Zhi Cultural Center, that he had just had a meeting with Cogeneration, a company that specializes in building power stations that simultaneously generate both electricity and useful heat. Councilman Red Eagle said he had “invited” Jones to the meeting but she did not attend.

“From the beginning, before chief (Red Eagle) even got elected, he said he wanted to start an energy company,” Councilman Red Eagle told the Osage News. “I said I would help … and I help with the communications aspect.

“Rod (Hartness) is a consultant, but wasn’t on the payroll till this year.”

When the Osage News asked Councilman Red Eagle if he would cease and desist according to the board’s wishes, he said, “It’s up to the chief – if he wants me to help, I will. If he wants me to stop, I will.”

He said Jones has been invited to all the meetings he’s had with Cogeneration and she’s sat in on the meetings with him before.

Chief Red Eagle told the commerce committee he hired Hartness to bring him up to speed in the energy business and he’s the “best energy consultant” he knows. Red Eagle declined to answer how much Hartness’ contract is for and Chief Red Eagle’s attorney Kirk Kickingbird told the Osage News it would have to file an open records request to get the information.

Chief Red Eagle said Hartness has more than 20 years of experience in pipelining. He has owned his own pipelining business, been involved in pipeline construction and worked for other companies. When the Osage News asked Chief Red Eagle if he could name any notable companies Hartness has worked for he said he couldn’t name any off the top of his head.

Hartness and Chief Red Eagle’s relationship has come under fire before when Chief Red Eagle used the Nation’s money to send Hartness to the National Congress of American Indians conference in Portland, Ore., in late October of 2011. The conference is the annual gathering of Indian Country’s leaders. Hartness is non-Osage and at the time was not an employee of the Nation or under contract. The Osage News asked Chief Red Eagle again Jan. 22 why he took Hartness with him to NCAI and he did not respond.

ONES board member Charles Hessert said he has worked with Cogeneration on two prior projects, he worked on the Okarche Gas Plant, he’s helped set up refineries and utilities, worked on a $4.3 billion joint venture with Conoco Phillips and Texaco, in which he retired after.

He told the committee he didn’t know why Chief Red Eagle needed a consultant when chief had all the consultants he needed on the board. Hessert said Councilman Red Eagle regularly “crashed” the board’s business meetings.

“Personally, it’s a slap in the face to me, what he (Chief Red Eagle) did with Rod Hartness,” he said. “I don’t need Rod Hartness as a consultant on what to do in this business.

“We look a little foolish when the company calls and they don’t know who’s in charge,” Buffalohead said. “I think it would be a shame for someone to write a piece of legislation to abolish this board (ONES).”

Chief Red Eagle said, “It’s an Executive Privilege to hire as many consultants as I want to.”

Speaker Red Corn said that the Osage Constitution is very clear that there is to be no political influence or interference with the boards from elected officials.

Legal counsel for Chief Red Eagle,Kickingbird, said Chief Red Eagle met with Jill Jones Thursday, Jan. 24, and the understanding from the meeting was that it was a communications problem between all the parties involved. He said he thinks there “is a fear of interference” but thinks the board will get past it once roles are more defined. Jones said she stood by her letter.

Congressman Supernaw said he was against the ONES in the beginning because his concern was Chief Red Eagle wouldn’t be able to let the board do its work independently.

“I voted for it because I was assured this wouldn’t happen,” Supernaw said.

Chief Red Eagle repeated Hartness has not interfered with ONES business.

Congresswoman Buffalohead said she asked Hartness’ wife in December of last year, Ashlee Hartness, Chief Red Eagle’s legislative analyst (appointed), if Rod would be involved in the ONES business and Ashlee told her he would not.

AG Jeff Jones said there would likely be no legal ramifications for Chief Red Eagle because the chief did not allegedly interfere in the meetings. Jones said it was a tough situation because the Nation’s business relationship with Enbridge Pipeline and Consolidated Power Services hinged on the understanding that personnel from either company would not be pulled into tribal politics.

AG Jeff Jones said it would take a hearing with testimony from the companies’ business executives to prove Chief Red Eagle had violated the Ethics Law and neither side wanted to jeopardize the business relationship.

Congresswoman Buffalohead motioned for the committee to write a letter to Chief Red Eagle requesting the contract and resume for Hartness.