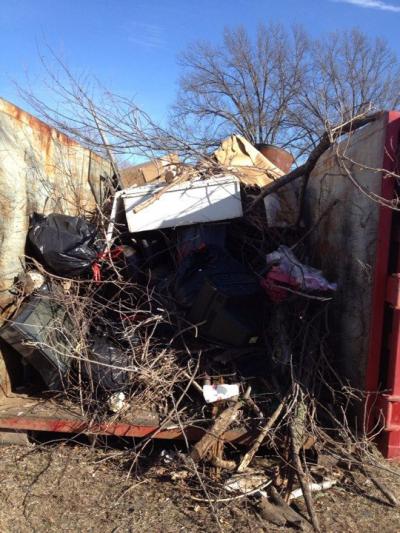 The Pawhuska Indian Village’s Five-Women Board spearheaded a community cleanup week starting Jan. 19 with several residents helping to pick up debris that littered the village grounds.

The village board and residents joined forces and picked up rubbish such as abandoned furniture, appliances, food packaging, shrubbery and other lose trash debris considered an eyesore for the residences. The board rented three dumpsters, which were set up in different locations around the village for the trash collection efforts.

During the board’s Jan. 21 meeting, Chairwoman Paula Stabler said those dumpsters were nearly full. Also during her report to the village, Stabler said she would contact Bobby Tallchief, of the Nation’s Emergency Management Department, for burn arrangements on objects that can be burned such as weeds and tree branches.

The board is also planning a “deep clean” of its structures including Wakon Iron Hall and the maintenance shed. Stabler said tape and leftover decorations from old events held in the hall need to be removed. She said the board is still considering improvement projects including upgrades to the plumbing in Wakon Iron. Recent projects completed include changing burnt-out lights in Wakon Iron and changing locks and installing motion-sensor lighting around the buildings to deter village property thefts.

The cleaning efforts are some of the recent steps the board is taking to improve the village in wake of the Osage Nation Congressional audit questioning the former board’s activities with emphasis on the village finances. The Congressional Office of Fiscal Performance and Review called into question the spending of village revenue when it noted that more than $806,000 of the village money generated through the Osage Casino lease was unaccounted for. That report spurred investigation efforts from federal authorities and the ON Attorney General’s office.

In wake of the report, former board Chairman Joe Don Mashunkashey resigned and the remaining board members decided a new board should be elected. Stabler, Jodell Heath, Paula Farid, Renee Harris and Asa Cunningham were elected by village residents in a special election held in October.

The board members’ terms expire in October, leaving them eight to nine months to get their improvement plans in order for the village and the government entities they must meet with to amend village bylaws and receive budget spending approvals.

At issue and up for discussion by the board and government entities are the finances and accounting of village revenue – a significant focus of the OFPR audit attempted last year. The report was made public in September with Mashunkashey’s resignation shortly after.

The Third ON Congress passed a $50,000 budget for the Pawhuska village board during a December special session as a temporary fix until the accounting issues are resolved.

Board Treasurer Renee Harris also said Attorney General Jeff Jones met with federal officials on Jan. 28 to exchange information on the simultaneous, but separate, investigations conducted by Jones’ office and the Federal Bureau of Investigation. Jones said an FBI investigator was assigned to the case by the U.S. Attorney’s Office to investigate whether federal charges are warranted in wake of the OFPR report.

Federal charges or not, Jones said his office will also file charges in tribal court if his office investigation determines there was wrongdoing regarding the former board activities and unaccounted village money.