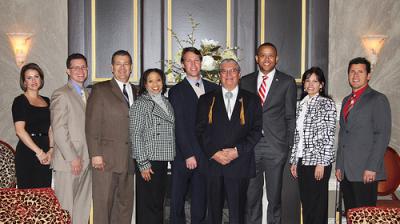 OKLAHOMA CITY – Osage Nation Congressman Archie Mason opened the Feb. 6 state House session with prayer. He was selected to serve as chaplain of the day at the state capitol.

State Rep. Seneca Scott (D–Tulsa) recommended Mason for the chaplain post and invited him to the fourth day of the 54th state legislature’s first regular session. That day, Mason opened the House session with a two-minute opening prayer before the House representatives conducted their regular session business.

The House representatives in attendance voted unanimously to confirm Mason as chaplain for the day.

Mason, who serves as Head Committeeman for the Grayhorse District and lay minister for a Tulsa-based church, delivered a two-minute prayer at the speaker’s podium in the House chambers. His prayer was tailored to acknowledge the Oklahoma state legislature with its lawmaking duties on behalf of all Oklahomans.

Mason, a longtime Tulsa resident, said he’s known Scott for years and the two visited on collaborating ideas where Osages and other Native Americans would benefit. He expressed gratitude for the opportunity to serve as clergy in the capitol.

“Rep. Scott's invitation allowed me a rare privilege and honor to stand and address the lawmakers of Oklahoma,” Mason said. “I had a great feeling of joy to express a prayer at the beginning of their legislative day and session … Being a Native American and knowing that other Osages have stood (at the podium) before, I was glad to join a select group of Osages and other Indian men and women to have a moment to voice through prayer.”

Mason said he took pride in serving as the day’s chaplain post where other Osages have contributed to state government work. Current Assistant Principal Chief Scott BigHorse served as state Representative during the 51st Oklahoma Legislature as well as Virgil Tinker of Fairfax who served six House Representative terms in the 1950s and 1960s.

Mason is lay minister of Tulsa’s All Tribes Community Church – an American Baptist USA denomination. He is a licensed clergy certified to conduct all functions except legal marriages due to Oklahoma law.

“Although never attending professional Christian educational training at seminary, I remain grass roots in my personal ministry and assist as chairman of our elders and chairman of our building committee at All Tribes, Tulsa,” Mason said. “Much support has come from Rev. Tom Moore, our pastor, who also pastors Bacone Chapel. Our church has been serving the Tulsa area since 1992 and is currently looking forward to our new church building being erected in the near future.”

Mason, a former Osage Nation Congressional Speaker, is serving his second term on the Congress. He was reelected in June 2012.

See more Osage News photos taken at the state capitol when Mason served as chaplain for the day's House session on the newspaper's Flickr page:http://www.flickr.com/photos/osagenews/sets/72157632775204038/