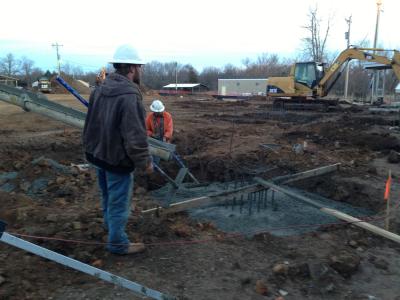 Construction progress is underway to complete the Grayhorse Indian Village roundhouse by early May – just in time for the annual Grayhorse War Mothers soldier dance.

Within recent weeks, work crews prepared the ground where the nearly 50-year-old former arbor stood before it was demolished in October. Ahead of a winter storm warning, crews poured concrete for the arbor footings before a Feb. 20 storm dropped snow, hail and freezing rain on much of northeastern Oklahoma including Osage County.

Despite the weather, members of the Grayhorse village Five-Man Board are confident construction will remain on schedule without further unanticipated delays. The Five-Man Board is overseeing the project with a Ponca City company selected to construct the roundhouse.

“It appears we are still in line for finishing in early May,” Five-Man Board secretary Judy Johnson said. “Barring some unforeseen circumstance or a long stretch of bad weather, we should have it mostly completed by Grayhorse War Mothers annual dance.”

The Gray Horse War Mother’s Soldier Dance is scheduled for Saturday, May 11 with a flag raising at 1:30 p.m.

Five-Man Board Chairman George Pease said crews worked as late as 8 p.m. on Feb. 19 to pour concrete before the storm picked up. He said a “substantial completion” date for the arbor is May 1 with minor work remaining once the arbor structure is erected.

According to the project timeline, construction crews expect to spend 86 days on the construction with the dirt work starting in January and the ultimate building completion slated for May 15.

Pease said Rick Scott Construction Inc. is the contracted company working on the structure. The company has offices in Ponca City and Tulsa, according to its Web site. The company’s portfolio includes interior and exterior building and remodeling projects of various structures including municipal buildings, private businesses and pool renovations throughout northeastern Oklahoma. The company also installed a pre-engineered metal building at the City of Perry water treatment plant, according to its Web site.

The Five-Man Board will hold a meeting with the construction crews on March 7 at 5 p.m. in the Grayhorse village chapel.

The board hired Tulsa-based architectural firm Kinslow, Keith & Todd Inc. to work on the roundhouse arbor design last year. The structure is being built with funding appropriated by the Osage Nation Congress last year in two separate bills totaling just over $1.5 million.

The former Grayhorse arbor was built in 1964 after a 1962 fire destroyed the previous roundhouse dance structure.