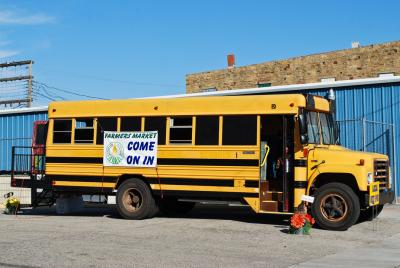 A mobile farmers market truck will not be making its weekly stops in Fairfax due to low customer turnout, leaving area residents without a fresh food outlet again.

The mobile store – built in a former school bus – is operated by a co-op of regional farmers and food makers called the Oklahoma Farm to Fork Market. The Rink family of Covington, Okla., runs the mobile store and started making stops in Fairfax at the invitation of the Osage Nation Executive Branch in October while the Nation sought buyers or occupants to open a food store in the vacant Palace of the Osage grocery store building.

The Nation, which owns the Palace building, invited the Rinks to park the mobile store next to the building so the bus could use an electric outlet to run its onboard freezers and refrigerators during its stops.

Paulette Rink, co-owner of the mobile farmers market, said the customer base was low in Fairfax and the truck quit making stops at the end of December. Rink and her husband Gary Rink originally agreed to a month-long trial run in Fairfax with three-hour weekly stops on Wednesdays.

“Sorry to say it didn’t work out,” Rink said in a Feb. 7 email to the Osage News. “I had some great people coming but it just wasn’t building.”

With the Rinks’ farmers market mobile store gone, Fairfax and nearby Grayhorse Indian Village residents are left without a fresh food store and must travel at least 30 miles one-way to the nearest towns for groceries including Pawhuska, Ponca City and Pawnee. Limited foods are available for sale in Fairfax at Dollar General and the Red Devil convenience store.

Rink said she had to make a judgment call at Christmas time. She said the truck generated four to six regular customers with several of them coming to the truck’s nearest weekly stop in Stillwater – 50 miles southwest of Fairfax.

The Oklahoma Farm to Fork Market’s only Wednesday stop is Stillwater from 3 p.m. to 6 p.m. at The Bank NA, according to a mass customer email sent by Rowdy Stickhorse. The mobile store also stops on Tuesdays in Enid and makes five stops in the Oklahoma City area on Thursdays and Fridays.

The mobile store invitation last fall came as a temporary grocery outlet solution with the Rinks’ initial stop in Fairfax on Oct. 24. Earlier in the year, the Nation received sole ownership of the Palace grocery store after two prior efforts by the Osage Limited Liability Company and Barnsdall businessman Rick Parker to run the store failed. The LLC transferred ownership of the building back to the ON government so it could market the building.

The LLC acquired the Palace after launching in 2008, but sold the store to Parker in 2010 amid money losses. Parker, who had money problems of his own and was delinquent on taxes owed to the Oklahoma Tax Commission, closed the Palace in late 2011 and the LLC began foreclosure proceedings against Parker. As part of the foreclosure process, the store was sold at a March 2012 auction with the LLC purchasing the building for more than $379,000.

The status of the Palace building was unknown when the March issue of the Osage News went to press. ON government officials were out of t