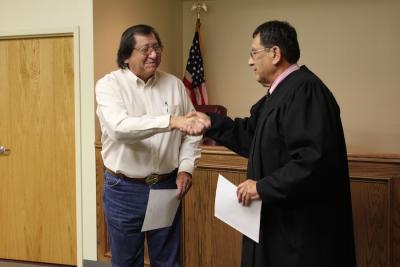 Red Eagle Jr. was sworn in by Osage Nation Trial Court Judge Marvin Stepson Feb. 7 at the Osage Nation Judicial Chambers in Pawhuska. The Third Osage Nation Congress will either confirm or deny Red Eagle Jr. a chance to serve during the Spring Hun-Kah Session, which begins March 25.

Red Eagle Jr. has more than 30 years experience in the oil and gas field, according to his resumé. His career was spent with Citgo Petroleum Corporation where he rose in the ranks to become senior supply coordinator for the Southwest and West Coast regions. He was responsible for more than $93 million in products for the company.

He joins Jill Jones, Charles Hessert, Randy Standridge and Mark Simms on the ONES board.

The board has made headlines after Jones and fellow board members alleged Osage Nation Principal Chief John Red Eagle meddled in board business by sending his younger brother Myron Red Eagle, Osage Minerals Councilman, and his consultant, Rod Hartness, to act as official contacts for the board’s business dealings.

Red Eagle Jr. is Road Man for his family’s Native American Church, located just outside of Barnsdall, Okla. He’s been director of the Wah-Zha-Zhi Cultural Center, he served on the First and Second Osage Nation Congress. He currently sits on the Osage County Industrial Authority board, the Osage County Health Department board and serves as the Osage Nation’s representative to the Indian Nations Council of Governments, another appointment by Chief Red Eagle.