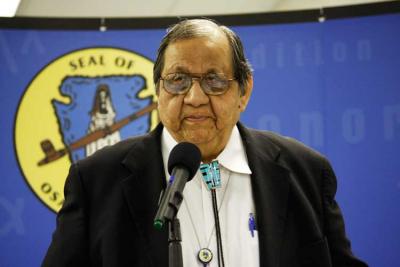 Osage Nation services are offered to all Osages. A majority of services are also offered to low-income families in Osage County. Some of those services received state and national recognition in 2012.

Principal Chief John Red Eagle touted these achievements in his annual State of the Nation address March 8 at the Wah-Zha-Zhi Cultural Center. In his roughly 30-minute speech, Red Eagle highlighted each department’s accomplishments. Some highlights were:

·      Women, Infants and Children (WIC) department, which provides baby formula and baby food for Osage mothers and low-income families, food vouchers, Farmers Market vouchers, training courses in parenting, breastfeeding, diabetes prevention, exercise plans. In the past five years participation in WIC has doubled. The department also received the U.S. Department of Agriculture Performance Recognition Award.
·      Social Services in 2012 developed an automated child care case management system enabling them to do more intensive background checks to better ensure the safety of Osage children. Social Services also developed a recruitment plan for Osage parents so Osage children can be placed in Osage homes.
·      Child care facilities are being improved in Skiatook and Barnsdall.
·      The Roads Department finished $5 million in improvements to Chief Paul Pitts road that connects Barnsdall and Wynona; another $5 million project  improved 39 Hill Road which takes patrons from Highway 123 to the Osage Casino-Bartlesville. The department will also be taking on the Osage Nation Heritage Trail, visitor’s signage and the Scenic Byway project, which began under the Jim Gray administration. The scenic byway is intended to improve roadways in Osage County and place historical markers for touristic benefits to the nation.
·      The Education Department awarded 2,200 scholarships in 2012. Bacone College and Tulsa Community College offer classes through the education department. The department also offers short and long-term job training for adults, and a workforce development program for Osages to gain work experience.
·      Osage Nation Police Department increased its staff to 20, with new hires being Osage. The ONPD obtained and widened their patrol of Osage County to include Wa-Sha-She Park.
·      Food Distribution served 500 constituents last year, delivering 90 pound to 100-pound food packages.
·      The CDIB Membership Office said the current Osage population is 16,725 and they registered 1,275 new memberships last year.
·      Communities of Excellence was successful in passing tobacco-free ordinances and the Osage Nation is completely smoke free. The department received two state awards for their efforts.
·      Wah-Zha-Zhi Cultural Center hosted their fourth annual Cultural Walk in 2012. They also host lecture series and offer cultural classes in roach making, beading on broadcloth, ribbonwork, shawl making, moccasin making, peyote stitch, loom beading and more.
·      Historic Preservation Office offers heritage site trips for Osages. Last year they took a group of Osages to Fort Leonard Wood in Missouri to tour historical Osage sites. This year they will take Osages to the Cahokia Mound in Missouri.
·      The Clinical and Medical Department offers diabetes prevention programs, public health initiatives and community health programs such as the Osage Nation Fitness Centers in Pawhuska, Hominy and Fairfax.
·      The Tribal Development and Land Acquisition office is complete with the planning stage for Phase I of the Campus Master Plan. Lending institutions are being sought for $10 million to begin the project.

Before Chief Red Eagle took the stage to give his state of the nation speech, Assistant Principal Chief Scott BigHorse asked for those in attendance to acknowledge the last remaining documented Osage full bloods in the tribe.

Red Eagle asked the audience to give special recognition to the late Osage Nation Supreme Court Chief Justice, Charles Lohah, who reportedly said his proudest moment was when he was appointed the first Chief Justice under the new Osage constitutional government.

“It’s appropriate he be in our thoughts today because he believed in the rights of the Osage people,” he said.

Red Eagle said that one of his priorities during his administration was to uphold and preserve the Osage culture.

“I had the opportunity to grow up in our culture … to be a part of my father’s life and teachings,” he said. Red Eagle said he wanted to make sure the Osage culture is preserved for future generations because he was proud to be an Osage.

Red Eagle, who flew in the day before his state of the nation address from the National Congress of American Indians executive council winter session in Washington D.C., said that six years into the new government the nation’s doing fine. “It’s (Osage Constitution) serving its purpose … the tribal leaders will carry on their vision of the Osage people.”

He said he never expected to be chief, that God put him there and if God wishes him to be in another position or place, that suited him fine.

“The next administration, whoever the chief might be, they will build on our accomplishments,” he said.

Osage Nation Sovereignty Day celebration will be held March 9 at the Osage County Fairgrounds. Gourd dancing begins at 1 p.m., dinner at 5 p.m., gourd dancing again at 6 p.m. and the parade-in begins at 7 p.m. The Nation’s tribal offices will be closed March 11 in observance of Osage Sovereignty Day. For more information about the celebration contact Otto Hamilton at (918) 287-5584.

[Editor's Note: This story was updated for clarification.]