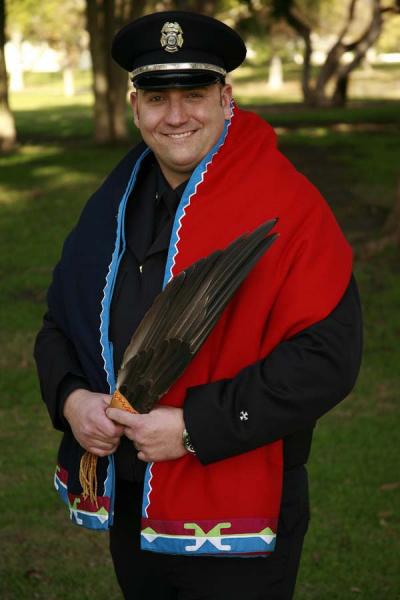 The Indigenous and Native American community now has a national resource regarding emergency management issues and assistance.

Thanks to a group of Native emergency response providers concerned about tribal communities being covered in times of crisis or disaster, newly-founded iTEMA is an organization that can help.

Jake Heflin, who is a firefighter and paramedic for the Long Beach (Calif.) Fire Department, is currently serving as interim president for iTEMA which stands for “Tribal Emergency Management Association” with the “i” added for ambiguous terms that iTEMA represents: Indian, indigenous, inter-tribal and information source.

Heflin and fellow Native emergency field workers spearheaded iTEMA’s creation after the group decided on forming an organization based on the demand and interest from tribal emergency workers who participated in an online survey. Those workers started working on iTEMA during a 2012 conference.

“We identified common trends in dealing with challenges and struggles,” Heflin said. The group also issued a nationwide Survey Monkey asking tribes whether a national organization is needed, he said.

According to the July 2012 survey 16 percent of the 566 federally-recognized tribes responded with 97 percent of the respondents supporting iTEMA’s creation. Those responding tribal entities also listed their top needs regarding emergency management and services. Topping the list are: training and exercises; funding and resources (including personnel); buy-in costs from leadership and communities; coordination, communication, information and inter-operability and restructuring of funding.

“One of the first responsibilities of a tribal government is to protect the people, property, land … A disaster can have devastating effects on those things so it’s better to be proactive,” Heflin said of iTEMA’s creation.

According to its Web site presentation, iTEMA’s mission statement is to promote: “a collaborative, multi-disciplinary approach to coordinate and enhance emergency management, response, and recovery to protect all tribal communities.”

As an organization, iTEMA’s purposes include: encouraging and facilitating participation in education, training and preparedness activities; promote, facilitate and support emergency management and services through a collaborative, multi-disciplinary approach and “to secure for all tribal people the rights and benefits afforded to them through treaties, the United States Constitution, executive action, federal legislation and United States Supreme Court decisions as they relate to the trust responsibility of the federal government with regard to Homeland Security, Emergency Management and Emergency Services.”

Heflin said he and his fellow board members are working to finalize the organization bylaws and documents to establish iTEMA as a 501(c)(3) nonprofit. Once iTEMA receives its nonprofit status, Heflin said the organization will ask for contributions from the public to fund its operations.

Heflin has 22 years of emergency service experience and said iTEMA’s 4-person executive board has more than 100 years of combined experience.

Heflin and his iTEMA colleagues took advantage of one opportunity to spread awareness of the new organization last fall when the National Congress of American Indians convened for its annual conference in Sacramento, Calif. At the event, the iTEMA members worked as the conference emergency response staff to provide assistance if needed. To make the services available, iTEMA made contacts with the city of Sacramento, which lent emergency equipment to the iTEMA workers.

Heflin said the contact with Sacramento emergency workers is one example of iTEMA fostering relationships with other entities whether they’re government or non-government such as the American Red Cross.

One federal official with emergency management in Indian Country experience applauds Heflin and iTEMA’s efforts to grow the organization.

Sid Caesar, who knows Heflin, is Chief of Emergency Management for the Bureau of Indian Affairs in Washington, D.C. He said iTEMA has the potential to address emergency management needs where efforts haven’t been as strong.

“I appreciate the time and effort everyone is putting in, they’re doing the right thing,” Caesar said. “There’s a real need for a national voice regarding emergency management in Indian Country.”

Caesar, a 28-year emergency service veteran, said he’s aware of regional and multi-tribal emergency management organizations, but iTEMA looks like it could take on a bigger presence in representing Indian Country.

Heflin said so far 84 entities, both tribes and tribal emergency service organizations, are expressing support for iTEMA through letters or written resolutions approved by tribal councils or the respective governing bodies.

iTEMA members are reaching out to all tribal entities, including the Osage Nation, and asking for their support through written resolutions and at a later time will seek contributions to fund iTEMA’s operations.

“We’ll need a financial revenue stream to support the outreach efforts and to develop the association further,” Heflin said.

iTEMA is inviting all tribal entities and emergency management workers as it holds its inaugural conference March 20-21 in New Orleans.

“iTEMA is working in partnership with Native Nations Events to deliver our inaugural Native American Emergency Services and Management Conference,” said Heflin who is serving as conference chair.

For more information, the Web site for iTEMA is at www.itema.org and Heflin can be reached atJake.Heflin@iTEMA.org.