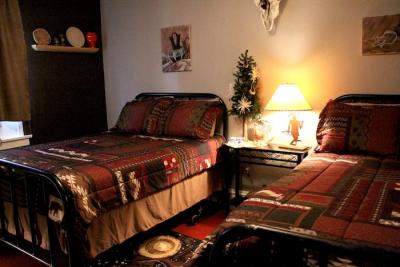 In the heart of downtown Pawhuska a family is trying to preserve the history and essence of the town by opening a bed and breakfast.

Stephen Easley (Osage) and his wife, Debra Easley own Historic Whiting Bed & Breakfast. Their daughter, Stephenie Easley (Osage) helps run the business by taking care of the public relations and the interior designing.

“We are hoping that by opening a bed and bath it will encourage other businesses to help grow the community,” Debra said. “This is the best little community with all the historic buildings and so much rich history.”

The bed and breakfast is a long time project that the Easleys have finally been able to fulfill.

The Easleys bought part of the Whiting Building on Kihekah Avenue in 1990 after Stephen, a Pawhuska native, retired from the horse racing industry. Stephen was a jockey, a stable hand and owned his own horse training business called Easley’s Racing Stable.

“We would be training and caring for 10 to 15 head of horses a year,” Debra said. “Stephen trained horses in Nebraska, Colorado, New Mexico, Old Mexico, Texas and Oklahoma.”

In 1991, the Easleys purchased the rest of the building and named the business section of the block, Osage Square.

The Easleys had the dream of having a bed & bath, however, they saw there was a greater need for apartments and focused on providing housing for residents.

“I got caught up with revitalizing Pawhuska and we bought a block of stores and started renovating and restoring the rooms on the second floor,” said Debra.

“We were completely full for 15 years,” she added. “When one person moved out someone else would move in.”

The Easleys also renovated the old Pawhuska Capital newsroom and turned it into their home which is located right behind the B & B.

Stephen said the Whiting building was built in the 1920s during the oil boom by Vernon Whiting.

“The building was an apartment complex for a lot of people who owned business in Pawhuska at the time,” Stephen said.

The building had 20 rooms and had 14 apartments for many years before they decided to fix up the other six rooms.

The Easleys began construction on the B & B at the end of 2010 and opened for business in October 2011.

“It started off with a boom then it slowed down but now we get a steady flow of people,” Stephen said. “During the summer dances (In-Lon-Schka) we have been completely booked.”

Not to mention, whenever there is an event in town the bed and bath is full, he added.

The Easleys also get tourists, business people and people who have relatives in the area stay at their establishment. She said she has even had people from Food Network stay at the bed and bath.

“It is unreal the people who come to Pawhuska,” Debra said. “We have always loved the community, town and have worked hard to promote it.”

The Easleys started off with six bed & bath rooms and are now adding six more.

“The response from customers was so great we decided to remodel more rooms,” Debra said. “The additional six will be done at the end of March.”

The Easleys have been in the auction business since the 1980s and even have an auction business called Easley’s Auction Service. Through their auction business they were able to purchase antique furniture and various historic pieces about Pawhuska, Osages and Osage County to put in rooms.

Also, each room has its very own theme such as the barn room, race horse room and Native American room. Plus, most bed & baths share bathrooms, but Historic Whiting doesn’t.

“Our bed and bath is unique because each room has its own bathroom and in our suites they have two bathrooms,” Stephen said. “Some rooms even have the original claw foot bathtubs.”

They offer two suites with two rooms, two bathrooms with a washer, dryer and full kitchen.

Each room has a kitchen with a microwave, toaster, coffee maker and refrigerator. There is also a BBQ grill and picnic area on the north side of the building.

Single rooms are $70 per night and the suites are $125. For more information on Historic Whiting Bed & Bath call (918) 287-4839 or visit their Facebook page at https://www.facebook.com/historicwhiting.osagesquare?ref=ts&fref=ts.