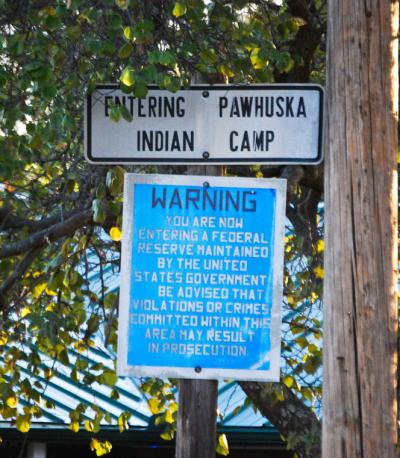 No updates yet in Pawhuska village investigation

As of March 22, Osage Nation Attorney General Jeff Jones said he had no updates to report regarding the federal and tribal law enforcement investigations of the former Pawhuska Indian Village Five-Man Board activities and finances.

Jones informed the Congressional Committee on Government Operations March 12 of the investigation status during the committee's monthly March meeting. Jones's update comes more than a month after he met with the U.S. Attorney's Office and the two entities shared information on their respective investigations.

Jones said he expects to receive notification from the U.S. Attorney's Office if federal charges are pursued and court proceedings are to take place.

The report noted a search of city utility bill records that revealed Mashunkashey paid electric bills for several individuals including family members and himself. This totaled more than $50,000 of the $857,000 figure. It also noted the board did not meet regularly and the chairman was sole person who kept the village bank records.

In late January, Jones's office met with Assistant U.S. Attorney Shannon Cozzoni and the Federal Bureau of Investigation officials also investigating the case. The entities shared case information and Jones said he has not been contacted by Cozzoni's office since that time.

"I have no reason to think they're not pursuing the case," Jones told the committee. "I don't think it's died because nothing's happened, I just think they're doing their behind-the-scenes investigation."

Committee chairwoman Maria Whitehorn asked if there were any future meetings set between Jones and the U.S. Attorney's office. Jones said no meetings were set.

"The Assistant U.S. Attorney (Cozzoni) said that when they start setting court hearings, grand jury hearings, she'd let me know those dates ... As of yet, there's none that I know of."

Jones and federal authorities were notified of the OFPR audit attempt and launched separate investigations into the board’s activities. Former Pawhuska village Five-Man Board Chairman Joe Don Mashunkashey resigned less than a week after the Sept. 7 report was made public.

The OFPR audit stalled after Mashunkashey declined to participate in the audit and release board financial records. The OFPR was also denied access to the board's account records kept at Pawhuska's First National Bank. An ON Congressional subpoena was issued for the records, but the bank would not honor the subpoena.

The FBI is investigating on behalf of Cozzoni's office and subpoenaed the bank records. It's unknown how far back the subpoenaed records date, Jones said last month.

If federal charges are sought, those subjects will be subject to grand jury proceedings to determine whether indictments are issued. The Tulsa federal grand jury meets monthly.