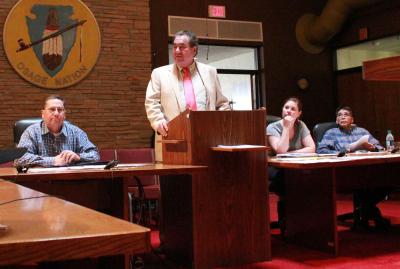 State Solicitor General Patrick Wyrick issued a letter to the Negotiated Rulemaking Committee March 13, threatening legal action if the committee did not amend the Code of Federal Regulations to recognize Oklahoma law regarding water rights.

“Today, with approximately 99.96 percent of Osage County being lands other than those held in trust by the federal government for the benefit of the Osage Nation, it is hard to fathom how federal officials now justify exercising regulatory authority over water throughout the entirety of Osage County,” according to the letter. “The federal government has no basis in law for assertion of jurisdiction over the waters of the State of Oklahoma either on its own behalf or on behalf of the Osage Nation.”

According to the U.S. Department of the Interior, the Osage Nation owns the minerals below the surface of the land and that includes the water. The Negotiated Rulemaking Committee, charged with updating the CFRs which govern the oil and gas production on the minerals estate, have not touched water use regulations and will meet for the last time April 2 at the Wah-Zha-Zhi Cultural Center in Pawhuska.

Currently, 25 CFR 226.24 states oil producers need only the approval of the Superintendent of the Osage Agency when using water from streams or natural watercourses. Producers cannot diminish the supply below the requirements of the surface owner from whose land the water is taken, according to the CFRs.

The Solicitor General's office wants to amend 25 CFR 226.24 to read, “Lessee or his contractor’s use of water shall be in accordance with the laws of the State of Oklahoma.” This would require producers to obtain water permits from the Oklahoma Water Resources Board before water usage in oil and gas production.

“We hope that you amend the regulation as we have suggested. If not, the State may be forced to pursue all available legal remedies to protect its sovereign right to regulate the waters within its borders,” according to Wyrick.

The Osage Nation Water Rights Task Force discussed the letter at their meeting March 14. Chaired by Osage Congressman Geoffrey Standing Bear, the task force is made up of members from the Osage Nation Attorney General’s Office, the Chiefs Office, the Osage Minerals Council, the Third Osage Nation Congress and the Environmental and Natural Resources department. The ONWRTF does not have authority to make decisions on the Nation’s behalf.

According to OMC Chairman Galen Crum, the Bureau of Indian Affairs is standing behind the CFRs and maintains the water in Osage County is a mineral and belongs to the Osage Nation.

The Solictor General and the Oklahoma Water Resources Board are basing their opinion from the outcome of the 2010 case, Osage Nation v. Irby, according to Crum. The case affirmed Osage County was not the Osage Reservation and that it was disestablished when it was incorporated into the new State of Oklahoma as Osage County.

“It is established that the Osage Minerals Estate is dominant and has the right to use waters for the specific use of production,” Crum said at the meeting. “Ford Drummond (President of the OWRB) made a big deal out of the reservation case and said, ‘you know, you guys (Osage Nation) lost the reservation case.’ I said, ‘No Ford, we still own the minerals estate.’”

Standing Bear urged caution to the group, saying “I don’t want to get into an argument with Oklahoma right now,” and that having been an attorney in Osage County for more than 30 years, he knows that the majority of lawyers and judges don’t agree with the Nation’s claim to water.

The Osage congress is working on five pieces of legislation involving water usage:

·      ONCA 12-119, Standing Bear, to provide an appropriation to the Environmental and Natural Resources Department for a hydrology project in the amount of $2,891,900.

·      ONCA 13-15, Standing Bear, to provide an appropriation to the ON Attorney General’s office for hydrology and legal consulting in the amount of $100,000.

·      ONCA  13-02, Speaker Raymond Red Corn, to provide an appropriation of $250,000 for a donation to the Osage County Rural Water District #22 on behalf of the Boulanger/Hickory Hill area. Standing Bear said at the March 14 ONWRTF meeting the bill will be amended to $25,000 for an engineering study.

·      ONCA 13-41, Daniel Boone (a member of the ONWRTF), to create the Osage Nation Utility Authority, to delegate certain powers and authority.

Standing Bear is also working on ONCA 12-68, a bill to establish an Osage Nation Water Code. The bill still needs input from the Executive Branch and an updated hydrology study. The bill is tabled until the Fall Tzi-Zho session, according to Standing Bear.

The next meeting of the ON Water Rights Task Force is scheduled for March 28, 3:30 p.m. in the Osage Nation Congressional Chambers.