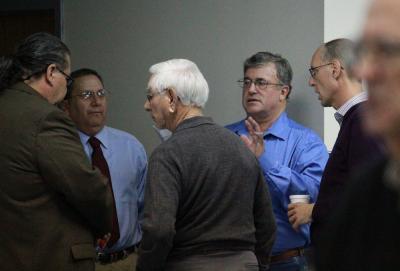 Change coming to oil and gas production in the Osage

The NRC held their last meeting April 2 at the Wah-Zha-Zhi Cultural Center, with many speeches against the proposed changes made to the CFRs, followed by many acknowledgements of hard work.

“I’m disappointed that there’s not more shareholders here,” said Curtis Bear, Osage Minerals Councilman. Bear said he did not agree with the majority of the changes made to the CFRs and that the changes will debilitate the oil and gas production in the Osage and he feels like he “failed as a minerals councilman.”

Minerals Councilwoman Cynthia Boone said she felt like the shareholders were getting the “bum’s rush” from the advisory committee and in a way the OMC is getting paid back for the 2011 Osage Trust Case Settlement. “The OMC started this lawsuit and the BIA is not letting us have a say in this process.”

Some of the changes Boone referenced was the changing in value per barrel to the greater of the average NYMEX daily prices of oil at Cushing, Okla., for the month in which the produced oil was sold; the bonding for plugging a single well to $5,000.

“It makes me wonder what’s going to happen to our minerals estate in the future,” Boone said. “I’ve heard some of the producers say they’re not coming back to the Osage.”

Councilman Andrew Yates, and member of the NRC, said the changes weren’t perfect but all parties involved worked to find a common ground. He said the higher standards set might benefit the Osage in the long run since for decades the Osages were getting pennies on the dollar.

“I have always been very much in favor of following federal regulations, especially environmental standards,” Yates said, referencing the hydrogen sulfide dangers and the new regulations addressing H2S specifically.

Yates also thanked Akin Gump attorney Merrill Godfrey for his work with the NRC and the 2011 Osage Trust Case and called him a “fine young man.” The OMC fired Godfrey at their last meeting March 20.

OMC Chairman and NRC committee member Galen Crum said the changes gave accountability where there was none.

“We had no auditing, no accounting functions what-so-ever,” Crum said. “This will put in regulations that will measure our gas production properly … this will protect the land, putting in regulations on H2S, oil spills …”

“They’re (shareholders) going to confront me ‘Why did you do that? Why did you let this happen?’ I’ll have to answer,” Red Eagle said. “You all (pointing at BIA officials) will go home to Denver and other places.”

Minerals Councilman Curtis Bear said he wanted everyone at the meeting to know he was voting “no” for the proposed changes.

A very vocal group present at all eight meetings and 16 public comment periods was the Osage County Cattlemen’s Association. Led by Jeff Henry, he said the OCCA was not pleased with the proposed changes and felt that the BIA completely ignored their requests.

“It’s very disappointing. At the March meeting they (NRC) completely disregarded our proposed changes and we never heard any reason why our requests weren’t considered,” Henry said. “I think we will continue to take the next appropriate course, whoever that may be, whether it be that of the BIA, DOI (Department of the Interior), at the DC level and continue to work through a revised version and see it through … we’ll stay involved for the betterment of the water, the environment and human health.”

BIA Director Mike Black thanked all the participants at the meeting and said the NRC worked hard on the proposed changes.

“We did fix what took 152 years with a $380 million settlement,” Black said. He said the NRC’s goal was to help the Osage Nation “manage this minerals estate in the way it should be managed for all those involved … this is the end of the process.”

The Negotiated Rulemaking Committee (NRC) is charged with updating the CFRs as a part of the 2011 Osage Trust Case settlement that gave the BIA two years to improve things in the Osage. In 2011 the U.S. Court of Federal Claims ruled and awarded the Osage approximately $380 million for the historical losses to its trust funds and interest income as a result of government mismanagement of trust assets for claims arising from 1972 to 2000. The case was started under the 30th Osage Tribal Council under Principal Chief Charles Tillman.

The proposed changes will now go through the Federal Advisory Committee Act (FACA) process. They will be given to BIA Director Mike Black to review and will go through one more public comment period before U.S. Secretary of the Interior to consider the changes.

Some of the proposed changes to the 35-page CFRs include:

·      Language in document to reflect the 2006 Osage Constitution
·      Royalty rate the sum of no less than 20 percent of the mineral extracted
·      Commencement money to surface owner for each well rose from $300 to $2,500
·      Payment to surface owner for tank batteries rose from $100 to $500 per tank
·      Prohibition of pollution to the surface and to subsurface fresh water
·      After completion of drilling, pits shall be emptied, reclaimed and leveled unless otherwise requested by surface owner or user
·      Unlined earthen pits shall not be used for the storage of salt water or other deleterious substances
·      All produced water must be disposed of by injection into the subsurface, by approved pits, or by other methods approved by the Superintendent
·      All spills or leakages of oil, gas, other marketable products, produced water, toxic liquids, or waste materials, blowouts, fires, personal injuries, and fatalities shall be reported by the producer to the Superintendent as soon as discovered, but not later than the next business day
·      Producers will keep a full and correct account of all operations, receipts and disbursements and make reports thereof, as required. Books and records shall be available for inspection and the producer will maintain and preserve the records for six years
·      Penalty for failure to obtain permission to start drilling rose from $50 to $150 per day
·      Penalty for failure to file records rose from $50 to $150 per day
·      Penalty to properly mark wells or tank batteries rose from $50 to $150 per day
·      Failure to construct and maintain pits is a penalty of $500 for each day after operations are commenced on any well
·      Failure to notify Superintendent before drilling, redrilling, deepening, plugging or abandoning any well rose from a penalty of $200 to $400 a day
·      Failure to properly dispose of deleterious fluids went from a penalty of $500 to $1,000 per day
·      Failure to maintain adequate bonding is $500 a day
·      All notices, approvals and citations to producers has to be in writing from the BIA

The NRC has been meeting since August of 2012.

To read all the proposed changes to the CFRs visit the NRC’s website at www.bia.gov/osageregneg/.