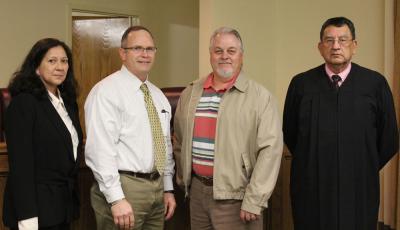 New Health Authority Board picks up where last board left off

The Osage Nation Health Authority Board has four new board members and they are picking up where the last board left off.

The board has had its ups and downs.

In 2012, ON Health and Wellness Division Leader Norma Merriman was dismissed from her job; then Lynette Freeman, Ray Hankins, Tim Tall Chief and Dr. Ron Shaw, who were newly confirmed members of the Health Authority Board, issued a resignation letter.

“I believe the Nation is very fortunate to have such a highly qualified group of professionals on our Health Authority,” said Debra Atterberry, Senior Adviser to the Chief. “This group has over 100 years of experience combined in the areas of public health administration, tribal government, medicine and healthcare accounting.”

The board began meeting at the beginning of the year and as of April 15 all the members were confirmed and sworn into office.

The first few meetings held members went over the laws concerning the Health Authority board such as the open meetings act, health authority act and the board and commissions act.

“I am fairly new in this position and the Health Authority Board has all new members so we are getting use to our roles and how to best work together for the Osage Nation,” Oberly said.

The board went over ONCA 11-116 at an April 15 regularly scheduled board meeting and came to the conclusion that the Health Authority Board is a governing board that has the authority over the ON Health Division, Burkhart said.

“By looking at the law the board is responsible for consolidating and implementing the organizational structure of the Osage Nation Health Division,” she said.

With that said, the board wants to take a look at the Osage Nation Health Division and increase access to patient services, improve patient care for Osage citizens and compacting health care for the Osage Nation.

“It is going to be a challenge but I am looking forward to working with the ON Health Division and getting it to be the best it can be,” Burkhart said.

“As far as we know the financial part is complete but we are going to double check and work on the other two parts,” she said.

However, the board’s next immediate priority is working on their budget as well as goals and action plan, which is due in June.

At the board’s meeting on April 4, Chief Red Eagle was in attendance and Oberly announced that Maria Rumsey had stepped down as the ON Fitness Center director and Anthony Shackelford, ON Prevention director, had taken her place.

“All trainers are target to be certified by the end of the year,” Oberly said in the meeting.

The Home Health board members were a little unsure about the news since they did not have the opportunity to vote on the changes.

ON Executive Executive Director for Governmental Affairs, Deidre Bigheart, said in the meeting the paperwork had been put together but misplaced until now.

The board decided they wanted to continue discussion of the changes at their next meeting on May 9 at 5:30 p.m. at BlueStem Cardiology in Bartlesville, Okla.

Burkhart (chair) grew up in the Grayhorse Indian Village and went to school in Fairfax. She has an associate’s degree in nursing and a bachelor’s degree in administrative leadership. She has been working for the Cherokee Nation for 22 years in the Health Department. Since 2010, she has been the supervisor for the Health Prevention Program in Tahlequah, Okla.

Moore (secretary/treasurer) has worked at Jane Phillips Medical Center in Bartlesville, Okla., for the past 27 years. He is the chief financial officer and vice president of finances. He has a bachelor’s degree in business administration, accounting and a master’s degree in health care administration.

William Tinker (co-chair) is a member of the Deer clan and is from the Pawhuska district. He is a cardiologist and in 1983 became a founding partner of the BlueStem Cardiology group in Bartlesville, Okla.

Tom Foreman works for the Northeastern Tribal Health System in Miami, Okla. He is board certified in Family Practice and holds a medical degree from Oklahoma State University College of Osteopathic Medicine.

“I think the board members are going to be really productive and I am looking forward to working with them throughout the year,” Burkhart said. “They seem really engaged and I feel we will have a good working relationship.”