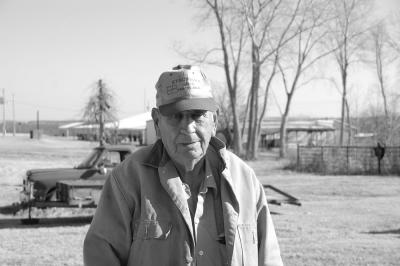 A rosary service by Father Bruce Brosnahan of the Sacred Heart Catholic church will be performed at 6 p.m. Friday, May 10 and a 10 a.m. funeral service on Saturday, May 11. Both services will be held at Grayhorse Chapel. Interment will follow at the John Tallchief Roping Arena Family Cemetery.

Following interment will be a barbecue in celebration of his life and death, according to his daughter Cecelia Tallchief. “This is the way we always celebrated his birthdays,” she said.

John Tallchief was born in the Fairfax Hospital on Oct. 23, 1917. The son of Eves Tallchief and Rose (Ware) Tallchief, he had five brothers including his older brother former Principal Chief George Tall Chief (1982-1990), who is still living. He also had three half sisters and one half brother.

According to his obituary, he was a lifelong resident of the Fairfax community, a member of Sacred Heart Catholic Church, and a World War II veteran. He was inducted into the U.S. Army at Fort Sill, Oklahoma on February 6, 1942. He was a Tech Sergeant in the 21st Infantry, with a specialty of Rifle NCO, and participated in the battles and campaigns of New Guinea and the Southern Philippines. He was awarded the Combat Infantry Badge on June 11, 1944. He was twice wounded in action in the Asiatic Pacific Theater, on Nov. 11 and Nov. 16, 1944, and was honorably discharged at the Fort Leavenworth, Kansas Separation Center on Aug. 28, 1945. His military decorations include the Purple Heart with two Bronze Oak Leaf Clusters, the American Defense Service Ribbon, and the Philippine Liberation Ribbon with two Bronze Stars.

According to a February 2008 Osage News interview at his former home in Grayhorse, Tallchief recalled memories of his life growing up in Grayhorse with his brothers, traveling by wagon, playing in and around a water hole that is now Grayhorse creek and watching the dances in the old roundhouse.

“We went to town in a wagon. It didn’t take too long probably an hour or so. There was an old store over here. Duke had a store over there (pointing to the north side of Grayhorse roundhouse). Yea, a store right here. A filling station. There was an Agency building down there too. Used to be,” he said.

In the 2008 interview, the Osage News asked him where and when was he the happiest?

“When I was young. When I got married. Pretty happy along in there. That war took a lot out of me (World War II). I was over there a long time. I was there during the whole war. They bombed Pearl Harbor on Dec. 7 (1941). I got a letter to go back on Dec. 16. I was overseas Jan. 6 and then from there we went plum down to Australia. Then we hit New Guinea. We were in New Guinea a full year. Talk about jungle, wild people and everything else down there.  I was wounded a couple of times pretty good. I spent some time in the hospital. Got my head caved in here (pointing to his forehead). Got hit in the face here (pointing to right part of his face). I got hit through both feet and one leg with shrapnel,” he said. “I was in the Philippines … but, then I went down and come to Australia and we fought our way back and come back in less than year in New Guinea in the jungles down there.”

Every year the Grayhorse War Mothers host a soldier dance to honor Osage soldiers, living and fallen, and songs are sung in their honor. This year they cancelled their dance due to Tallchief’s death.

According to the 2008 Osage News interview with Tallchief, he went to school in the old Grayhorse school which sits about a half-mile from the roundhouse to the west. It is now abandoned.

“We’d either ride horses over there (to school), walk over there, we’d follow Quarles and Ida Bates to school. If the weather was bad they’d haul us over there in a wagon.  They had a hard hand, dad did. He’d put us in that wagon box and put a tarp over it,” he said. “We was just little boys. They sent us off to school. We went to Pawnee Indian School, we stayed down there about a year I think. Then they sent us to Salina, Kans., to military school. We stayed up there for five years, I guess. Then they sent us from there down there. Then we’d come back up. I went to school at OU for a little bit. I didn’t stay long, went one semester I think. Then I got out of there and went and got me a job.”

Tallchief and his brothers rode their horses all the time in the Grayhorse Indian Village. In his older years, Tallchief became known for his steer roping and riding skills as he competed in one of the largest rodeos in the country, the Cheyenne Frontier Days in Cheyenne, Wyo.

“I went to Cheyenne every year for years. I don’t know, that was like 1962?  I was still going out there, but I got a life membership card to the RCA (Rodeo Cowboy Association). I got a gold card. I still got it in here (pointing to his wallet). I carry it,” he said. “We went to Cheyenne probably like every year. We went the last couple of years. But, my wife (the late Pat Tallchief) and I used to go every year just to watch them.”

He always stayed active in his elder years. At the time of the 2008 Osage Newsinterview Tallchief was still taking care of his grandson Stetson American Horse, whom he and his wife had raised from infancy. He said he and Stetson had gone to Frontier Days that year, just the two of them. At the time Tallchief was 90 years old and Stetson was 14. He said all he wanted to do was raise him to the age where he could take care of himself. He said at the time, “Yeah, he keeps me on the move.”

According to Tallchief’s obituary, in July of 2011, he drove to Cheyenne with his brother George to celebrate Frontier Days. He was a Native American Cattlemen’s Association board member, and a Gold member of PRCA. He drove daily to Ponca City to get the latest issue of The Daily Oklahoman.