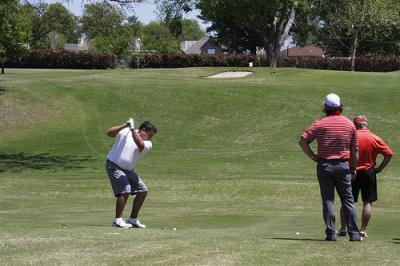 “The event went very well,” said Bill Webb, ONF executive director. “Our support from the Osage people and doing business with Osage continues to be excellent.”

The event sold out with 110 golfers making the rounds at the Tulsa Country Club.

Kenny Bighorse (Osage), along with family members and friends, played in the tournament.

“As an Osage tribal member I try to support anything the tribe does and I liked that the golf tournament went to a good cause,” he said.

Bighorse has played in the tournament both years. He said the Tulsa Country Club is always a good location to host an event since it has a great view of downtown Tulsa.

On top of the golf tournament, ONF provided lunch, cocktails and had a raffle.

“We had a raffle of several items donated by Osage Casinos, including a golf bag, a leather jacket and watch,” Webb said.

The Osage Casinos also sponsored several holes for the tournament.

Osage Casinos CEO, Neil Cornelius along with other casino executives played on a team in the golf tournament.

“I enjoyed the Osage Foundation golf tournament very much,” Cornelius said. “It was a nice day outside and I was able to visit with several great people.”

“In particular, the support of Osage Casinos and their vendors is very important to our financial success,” Webb added.

Webb is very happy with the money raised and the $23,000 will fund the ONF Summer Youth Camps, which will be held in June and July.

“We have added a Tulsa Zoo camp this year, in addition to soccer, that go with our other offerings including basketball, digital photography and golf,” Webb said. “This is the second year for our camps and our golf tournament.”

The Pawhuska Basketball Camp will be held June 17-20 at the Osage Nation’s Boys and Girls Club. Campers will learn fundamental and advanced basketball skills. Participants must be in grades 3-12 as of fall 2013.

The Pawhuska Photography Camp (I & II) will be held June 24-27 and July 22-25 at the Osage Nation’s Boys and Girls Club. Sherry Stinson, owner of TylerDog Photography and Tyler Creative studios, will teach the camp. Campers will learn the basics of using a digital camera and how to take photos. Participants must be 8-17 years old.

The Tulsa Golf Camp will be held July 8-9 at First Tee of Tulsa. Leslie Core-Drevecky (Osage) will be coordinating the camp. Drevecky is a certified PGA Head Golf Professional at Murphy Creek Golf Course in Aurora, Colo. Campers will learn the game of golf. Golf clubs will be provided for those who do not have their own. Participants must be in grades 3-12 as of fall 2013.

The Pawhuska Soccer Camp will be held July 10-12 at the Pawhuska Athletic Fields. Campers will learn the fundamentals of ball control, dribbling, passing and shooting. Boyna Bear (Osage), a former Division I Collegiate and professional soccer player, will be leading the camp. Participants must be grades 3-9.

Tulsa ZOOmbie Hunters will be held July 15 to July 19 at the Tulsa Zoo. Campers will have live animal encounters, game crafts, zoo hikes and hands-on activities. Participants must be 8-12 years old.

The summer youth camps are now open for registration atwww.osagefoundation.org.

Registrations will be accepted on a first-come, first-serve basis with preference to Osage tribal members. If applicable, attach a copy of Osage membership card.