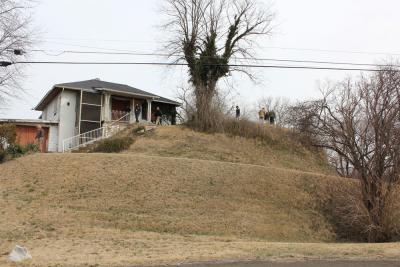 ST. LOUIS – The Osage Nation Historic Preservation Office hosted a trip for Osages to visit Mound City, a reference to the dirt mounds built by the Indigenous society living when Osage ancestors were in the region, according to archeological research.

The HPO trip held March 18-22 brought 20-plus Osage attendees, their families and tribal government workers to see the remaining mounds and archeological works in the surrounding St. Louis area. At one time, St. Louis had more than 40 mounds and was referred to as Mound City.

The group visited Sugarloaf Mound on March 19 with the participants allowed to climb the mound to see the house and scenic views from atop which include the Mississippi river to the east and Interstate 55 to the west.

Through the years, urban development on the St. Louis side of the Mississippi River destroyed all but one mound – Sugarloaf Mound located minutes south of downtown and the world-renowned Gateway Arch. Sugarloaf Mound hit the newswires in 2009 as then-Principal Chief Jim Gray purchased the mound for $235,000 and plans were announced for the mound to be preserved with a proposed historical interpretive center to be built.

A vacant house remains standing on top of the mound with plans to raze it for the interpretive center, but further study is needed on the mound’s integrity, according to Hunter. In the meantime, the mound property belongs to the Nation with 24-hour surveillance video keeping watch on the mound for trespassers.

Sugarloaf Mound’s 2009 purchase became controversial after the First ON Congress declined to fund the purchase. As a result, Gray purchased Sugarloaf Mound with money from the Nation’s properties budget. Hunter said in the meantime the mound is being preserved in a collaborative effort under a preservation plan drafted by local historic preservation specialists with guidance from the Nation.

During the trip, the group also crossed the Mississippi to visit the Cahokia Mounds State Historic Site in Collinsville, Ill., where several mound types remain standing in what’s considered the largest prehistoric Indigenous city north of Mexico. At one point there were 100-plus mounds in the Cahokia city area. According to the Cahokia Mounds written tour guide, mounds were used for primarily ceremonial purposes, but some were also used for burials.

The tour group also visited the Collinsville office for the region’s Illinois Department of Transportation where IDOT discussed its working relationships with Native American tribes. The IDOT also discussed its mitigation efforts for building its half of the Interstate 70 multi-lane bridge over the Mississippi River.

The trip also extended one hour south of St. Louis to view petroglyphs in Washington State Park near DeSoto.

Some trip participants praised the trip as a learning experience.

Osage elder William Sam Fletcher said he’s been to the St. Louis area several times and said he learns something new with each visit.

Jim Ryan called the experience “the trip of a lifetime where you’re chauffeured by expert archeologists.”

Rebekah Horsechief said she took the experience into mind for her return to Oklahoma to share with her father. “I took it all in for him, my Dad couldn’t be here,” she said adding the knowledge makes her more proud of her Osage blood.

Donna Barrone also attended the Fort Leonard Wood trip and noted the learning aspect of the trips helped her learn about another side of the Osage history. “These trips will help us when we go to the Dhegiha language gathering conference,” she said. The conference event is scheduled Aug. 6-7 in Tulsa.

In its third year, the Dhegiha conference is the first ever gathering of tribes whose languages come from the Dhegiha linguistic family, which comprises Osage, Omaha, Ponca, Kaw and Quapaw.