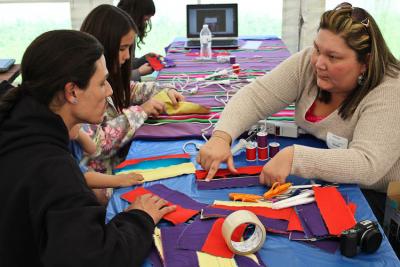 PETALUMA Calif. – More than 70 Osages and their families gathered to congregate, network and learn during the Northern California Osage’s spring meeting held at the KOA campgrounds on March 23.

NCO committee member Nannette Kelley said the organization is nonpartisan with its focus on providing a meeting venue to share fellowship and cultural ideas and concerns among Osages living in California. NCO meetings held in the past hosted election year candidates, but this non-election year brought an opportunity for the meeting to focus on culture.

In the tent, Osage attendees of all ages took turns at making a pair of moccasins or sewing some ribbonwork. Others participated in several rounds of Indian dice and shared laughs and fellowship with one another.

“To me, this was the most important type of meeting – it’s our culture,” Kelley said. She and other organization committee members “thought it would be best to get cultural classes for the meeting. I brought it to the Northern California group and asked ‘is this something we want to do?’ and we went from there.”

More than 15 employees from the Nation’s department entities presented or assisted with information booths at the event. Those represented were departments of Language, Historic Preservation, NAGPRA, Social Services, Child Support, Cultural Center, and the Osage Tribal Museum.

Vann Bighorse praised the idea of having Osages come from Oklahoma and share knowledge with fellow Osages. “This outreach is very important, it’s given us an opportunity to teach our people about our culture and history.”

Fields said she is also collecting feedback from Osages on the Nation’s clans. The survey is now available online through Survey Monkey. The survey started May 1 and ends July 31. Participants can take the survey at https://www.surveymonkey.com/s/osageclan2013.

Osage language instructor Janis Carpenter said her department is working on a computer app focused on the language. Carpenter, who teaches the high school language classes in Pawhuska, showed a preliminary presentation of the app, focusing on sentences, vocabulary and even quizzes.

“We are exploring options and thinking of non-Osage County Osages,” Carpenter said.

Lee Collins, director of ON Social Services told the attendees her department is in need of more Osage foster parents. She referred to the Indian Child Welfare Act, which is the federal law giving Native Americans preference in child welfare/custody cases. The Congress passed ICWA in 1978 in response to the alarmingly high number of Indian children being removed from their homes by both public and private agencies, according to the National Indian Child Welfare Association.

Education Department worker Jennifer Holding discussed the increase she’s seen in scholarship applications she received through the years during her 15-year employment with the Nation. Holding reminded the attendees of upcoming deadlines and said several printable documents for Education Department services, programs and scholarships are available from its Web site on osagetribe.com.

After the presentations, the attendees ate dinner then reconvened in the tent to play several rounds of handgame with several of the ON speakers helping the attendees who were first-time players in the guessing game.

Attendees of the Northern California Osage group stay in touch via Facebook and several shared their praises of the meeting afterward.

“Your turn out was very impressive and sets the stage for a lot of possibilities,” Standing Bear said in a posting.

“It was a great time. Worth the drive from Chico, for sure,” posted Daniel Taylor.

Southern California Osage resident Jake Heflin made the journey to the Petaluma meeting immediately following a work conference in New Orleans, the travel was worth it to him.

“Anytime we can showcase our culture, I think that is a positive experience, culture is what binds us together,” said Heflin, a Long Beach resident with familial ties to Kelley. Heflin said he supports the Language Department and looks forward to seeing technology movements involving the language because he believes it will be an asset for Osages living out of state – especially those with children.

Kelley said the NCO group aims to host two annual meetings with the next one targeted for fall. The meeting locations change depending on arrangements. Previous host cities for NCO meetings include Santa Rosa and Oakland. For more information about the organization, go online to: www.northerncaliforniaosage.org.

See more images from the NCO meeting on the newspaper's Flickr page online at: www.flickr.com/photos/osagenews/sets/72157633501163127